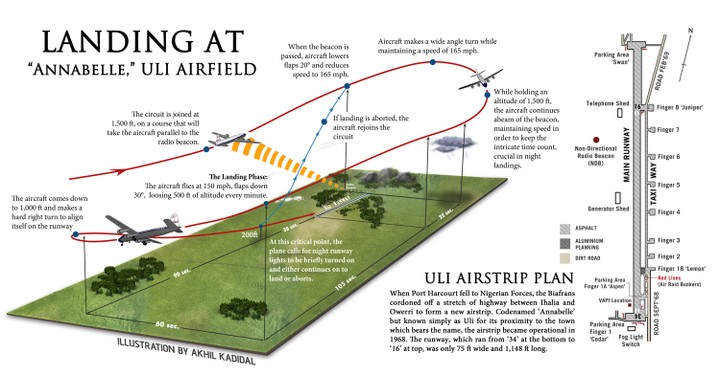 Uli, in the Ihiala Zone of present-day Anambra State, played a strategic role during the most strenuous period of Igbo civilisation. While the Nigerian state aggressively pursued an “all is fair in war, and starvation is one of the weapons of war” policy, Uli Airstrip paid a glowing tribute to what we have always known about ourselves.

Many historians agree that 1967-1970 would have had even more tragic consequences had it not been for the sacrifices that were made to protect and keep Uli Airstrip in a serviceable condition.

Because major airfields in Biafra were captured by forces loyal to the government of Nigeria early in the war, Uli Airstrip became the most important link between the “dot in a circle” and the outside world. When Nigeria instituted a total blockade of the region, pilots have to attempt very dangerous night landing manoeuvres to avoid Nigerian forces shooting their planes out of the sky.

There exist graphic details of how runway lights, for instance, will be turned on and off at specific times. Beyond the human causalities of protecting that important airfield, it took a great deal of engineering artistry, synchronicity and evasive manoeuvres to land planes there.

With the tactical manoeuvres that accompanied each successful landing at the Uli Airstrip, Ihiala became another symbol of Igbo ingenuity, tenacity and drive. Sadly, modern-day “freedom fighters” have reduced Ihiala to a theatre of violence and mindless bloodletting.

Who would have believed that people whose parents were saved from starvation would turn around to kill, kidnap and terrorise at the same spot where men and women, some foreigners, gave their lives so that hunger will not wipe off an entire nation?

Whatever the excuses – and there should be a lot of them – we should, at the very least, publicly acknowledge that what is going on in the southeast today, which Ihiala has unfortunately become a major flashpoint, is not the best way to address the many injustices of the country called Nigeria.

E reach for us to lament! The creative energies of some of our young people have been corrupted through the artful but manipulative use of words.

The damage is far-reaching.

It will take a while and a whole lot of effort before we recapture the hearts of our misled brethren and help them come back to the conclusion of our forefathers that Igbo advancement comes through witty inventions, tenacity, industry and shared values — not from victimhood mentality, rash emotional outbursts, hatred, hero-worship, unexamined “truths” and mindless destructions.