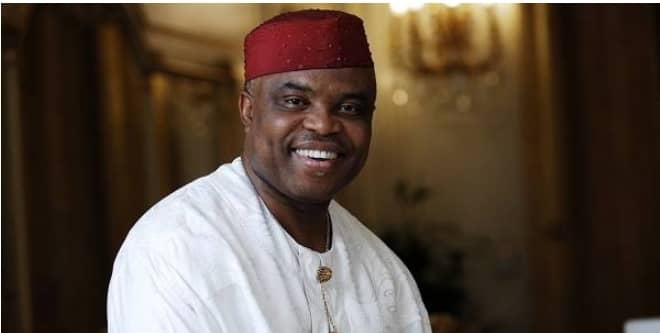 After 12 years of visionary leadership, Dr.Ambrosie Bryant Chukwueloka (A.B.C) Orjiako last week announced his resignation as the Chairman of Seplat Energy Plc, leaving behind a record widely seen as raising the bar for his successor.

Not many Specialist Orthopedic Surgeons would have thought of venturing into a business that has nothing to do with their highly revered profession. But Orjiako would rather go with his desire to play more active role in growing the nation’s economy which saw satisfaction in the oil and gas sector.

Founded in 2009 through the coming together of Shebah Exploration and Production Company Limited, which he founded in 2004 and Platform Petroleum, founded by Mr. Austin Avuru, Seplat started production in three Oil Mining Licenses (OMLs) in 2010.

However, in April 2014, the company completed the first ever dual listing on both the London Stock Exchange and the Nigerian Stock Exchange (now Nigeria Exchange Ltd), raising $535 million in an initial public offering that ranked as the largest for a sub-Saharan Africa company since 2008 and the second largest ever for a Nigerian company, demonstrating international investors’ appetite for leading Nigerian indigenous players in the oil and gas sector.

The company delivers to the domestic gas market over 30 per cent gas needed to power Nigeria. It employs nearly 700 staff, has generated over $6.2 billion in revenue share for Nigeria, paid over $1.4 billion to Nigerian contractors and staff, and paid over $400 million in dividends to shareholders.

In another milestone in 2014, the oil and gas giant became the first Nigerian company to acquire a UK-listed company, Eland Oil & Gas Limited. Seplat boasts of over $2.8 billion in assets and over $500 million in market capitalization. Under Orjiako’s chairmanship of Seplat, the company has injected over $71 million into providing services to host communities as part of it corporate social responsibilities.

It raised $260 million through a consortium of banks to fund its part of $650 million financing for the ANOH Gas Processing Plant. It is expected that the ANOH will deliver the first gas to the market between the first half of 2022 and first quarter of 2023.

In its tradition of thinking ahead, setting agenda, and contributing to the efforts at confronting Africa’s power deficit in a world gravitating toward energy transition and where Climate Change, Environmental Sustainability Governance, and Policy Changes are dominating the energy discourse, the company, in 2020, launched the Seplat Energy Summit (SES).

The inaugural summit held by video conference to mark the indigenous oil company’s 10 years of pioneering participation in oil exploration by Nigerian firms was themed “Business Sustainability and Strategic Leadership in Africa,”

It provided valuable insights on the challenges and role of energy systems to build sustainable Africa economies. The continent has overtime faced enormous challenges of meeting its vision of accelerated economic and industrial development with limited access to energy for its growing population. The 2021 edition of the summit was themed “Global Trends in Energy Transition and the Africa Perspective”.

Orjiako rounded up his tenure as the Chairman of Seplat on a high note with the February 2022 announcement of a successful bid for the entire share capital of Mobil Producing Nigeria Unlimited (MPNU) from Exxon Mobil Corporation, Delaware, USA at $1.283 billion, plus up to $300 million contingent consideration.

The deal comprises 40 per cent operating ownership of four OML leases (OMLs 67, 68, 70, 104) and associated infrastructure (NNPC is the 60 per cent partner) plus the Qua Iboe Terminal, 51 per cent interest in Bonny River Terminal, and Natural Gas Liquids Recovery Plants at EAP and Oso. Although the deal’s consummation by way of ministerial approval has still not come through, beating other equally formidable bids is a massive plus.

“Our cash position remained strong as we ended the year with $341 million in cash and a net debt of $426 million. We have certainly delivered on that vision of building a business that is now the leading Nigerian independent and a major provider of natural gas to the domestic market,” Orjiako told shareholders at the company’s 9 Annual General Meeting (AGM) in Lagos.

“It is therefore, a promise kept in the overall interest of the Company. I have now served as Chairman of Seplat Energy for 12 years and it has been an honour and a privilege to do so.

“I am proud of what we have been able to achieve, as we established ourselves as the largest indigenous independent energy company in Nigeria through operational excellence, the acquisition of eight oil and gas assets, the expansion of our domestic gas business and the dual listing on both the Nigerian and London Stock Exchanges, the first by a Nigerian company.

“These achievements are down to our excellent team and our strong, collaborative relationships with our stakeholders.

“With the recently announced proposed acquisition, we are going to be in an even better position to drive transformational growth and profitability for all our stakeholders, meet our vision of delivering Nigeria’s energy transition and become the Nigerian energy champion.
“I am leaving the Board of Directors with a sense of fulfilment, not only in co-founding Seplat Energy, but also steering it to an enviable position.”

He serves on the boards of firms in various industries, including healthcare, technology, and financial services. He is the Chairman of Neimeth Pharmaceutical International plc, a company traded on the London Stock Exchange.

A Director of MPI, traded on the NYSE Euronext Paris, and a Director of Leadway Assurance Company Limited, he joined the London Stock Exchange’s Africa Advisory Group (“LAAG”) as a founding member by invitation, a select group striving to generate and channel ideas and solve challenges impacting the African continent from a commercial and social viewpoint.

3 thoughts on “A.B.C Orjiakor: Bowing out when ovation is loudest”