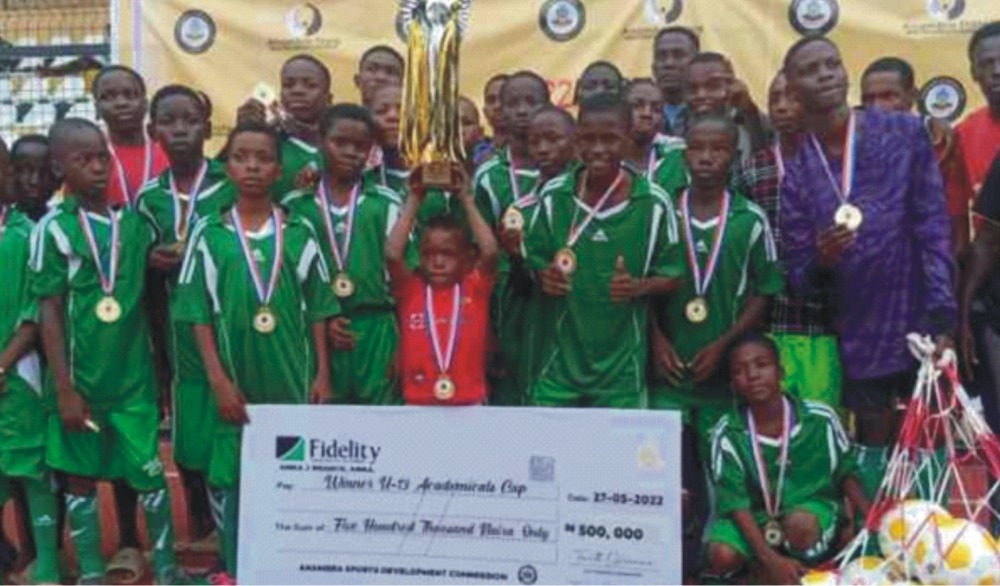 After the meticulous screening by officials, the tournament kicked off, in the U13 boy’s category, Umuaraba Community Primary School, Ukpor edged Anyaegbunam Primary School, Onitsha 4-3 on penalties after a goalless draw in full time.

In the girl’s U17 category, Christ the Redeemer College, Amesi, in Aguata LGA, posted a dominant 4-0 performance against their Stella Maris College, Umueri who were no match for their opponent.

Ukpor completed their overall sweep of the trophies on the night when Ukpor High School defeated Washinton Memorial Secondary School, Onitsha 5-4 on penalties after a 1-1 regulation time scoreline.

Each of the six school teams also received 10 match balls from the organisers.

However it is important to note that the tournament was in three categories of U13 (boys) for Primary Schools, U17 (for girls) and U17 (for boys) for secondary schools.

There were individual awards for Most Valuable Player, (MVP), in each category and best goalkeeper.

Aside from a giant trophy, Umuaraba Community Primary School, received a cash prize of N500,000; Christ The Redeemer College, Amesi who won the female U17 trophy received N1m, the same amount Ukpor High School were rewarded with following their triumph in the male U17 category.

Stella Maris College, Umueri and Washington Memorial Secondary School, Onitsha, who were runners-up in the female and male U17 categories, went home with half a million naira each.

Another highlight of the day was the recognition of 7 year old Igboka Chinweobi, who was rewarded with a private ball and a medal by Hon Tony Oli. The young lad without instructions or being monitored took it upon himself to be the official ball boy.