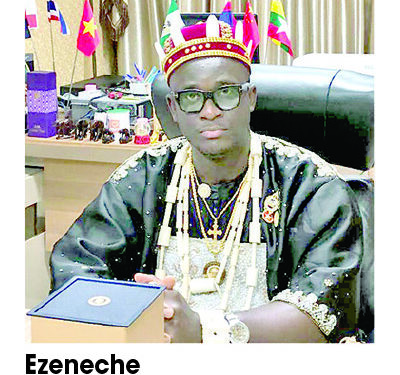 As Nigeria prepares for general election next year, the Eze Ndigbo Mekong River, South East Asia, HRH Eze Amb. Jerome Uzochukwu Ezeneche (Eze Nwanta gwuoshimiri) has called on The Independent National Electoral Commission (INEC) to immediately make provisions for Nigerians in the Diaspora to vote during the election through their embassies by providing them with Permanent Voters’ card.

In a statement, HRH Ezeneche said over 30 percent of Nigerians above 18 years live outside Nigeria.

“It baffles me when Nigerians in the Diaspora can not vote through their embassies as obtainable in most developed countries. If passports could be renewed through the embassies and NIN updated online, why can’t INEC Permanent Voters’ card be issued through our embassies”? he queried.

On the just concluded Presidential primaries in PDP and APC, where no any Igbo from the South East emerged as presidential candidates, the king of six nations agreed with Dr Ogbonnaya Onu that base on justice and equity, power through concensus should go to the south east.

While critically analysing the chances of the candidates, HRH Ezeneche scored former governor of Anambra, Peter Obi high among other contenders. Atiku Abubakar is a great politician no doubt. but he has been there since 1999. As such, we needs fresh legs to move the nation foward. Again Tinubu of the APC is an experienced politician that I respect a lot, but he is too old to tackle problems facing the country at the moment.”

The Royal father concludes by calling on INEC chairman, Mahmood Yakubu to ensure that he conducts free and fair elections where justice and equity would reign.

In alternative, the king of six nations suggested that the Federal Government adopts the Dubai model of government whereby Nigeria would be restructured into 3 regions with the federal government coordinating at the center. such arrangements will produce Atiku Abubakar as administrator of Northern Region, Peter Obi Administrator of Southeast and Bola Ahmed Tinubu administrator for Southwest region. “This arrangement if well implemented will lead to massive development of the country arround regional line and the center will be less attractive for looters”, he said.