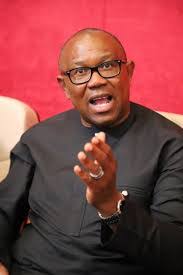 The Peter Obi Support Network (POSN) has received with disappointment, a most disappointing tirade credited to a respected clergy and political activist, Rev. Father Camillius Mbaka, in which he poured out his wrongly strewn sentiments and misconceptions about the person and character of the frontline presidential candidate, Mr. Peter Obi, and we wish to react as follows;

That Mr. Peter Obi holds Reverend Father Mbaka and the entire Adoration Ministries Family, Enugu in very high esteem, and will find time, as soon as he returns from his knowledge – enriching trip to Egypt, to interact with the Priest and clarify, where necessary, on his obvious misconceptions about his character.

Mr. Peter Obi is a prudent investor in human capital development and religious works. These are evident through his multimillion Naira investments across different Church parishes, schools, hospitals and in individual interventions in setting up young entrepreneurs and innovators in different fields. However, in line with the Biblical injunction that in Matthew 6:3, Mr. Peter Obi does not have the habit of advertising his philanthropic interventions, and does not wish to learn that, this time. In and out of government , Peter Obi has intervened in several humanitarian situations, within and outside the shores of Nigeria. Notably, he has donated to building and renovation of schools, hospitals, and other public infrastructure, without making noise about it. During the humanitarian crisis in Haiti, he mobilized over 200,000 Dollars in humanitarian aids through his personal donations and those of his friends to alleviate the situation in that country.

The Peter Obi Support Network and other accredited support groups for Mr. Peter Obi’s presidential campaign, believe that the actualization or otherwise of a Peter Obi presidency can only be determined by God and majority of Nigerian electorate and we respect the opinions of everyone or group of people who disagree or agree with our positive faith towards our goal of making Peter Obi the next President of Nigeria.

We understand that Reverend Father Mbaka is one clergy who is highly passionate about Nigeria’s redemption and greatness and we look forward to working closely with him towards actualizing this shared dream of a; “working, equitable, free and productive country”, from 2023.

However, it is important to point out that unlike what Father Mbaka might have been led to believe, Obi is a kind, but self-effacing human capital developer. We cannot outline one tenth of his humanitarian, social and educational development interventions across Nigeria, but a few will suffice; As a businessman, he has thousands of employees across his businesses, whom he pays well.

For years, Peter Obi has donated biillions of Naira to schools; he gave 2 million and 1million each to about 20 schools in Nassarawa and Kogi for books and classroom desks when he was not contesting for election.

Peter Obi has gone as far as Sokoto State to support education and the current governor of Sokoto State, aminu Tambuwal can attest to Peter Obi’s multifarious human based philanthropy and educational development initiatives. In Benue, he has undertaken the renovation of schools without bringing the paparazzi along with him, because he believes that humanistic interventions shouldn’t be done for political advantage.

Borne out of his passion for humanitarian service, he began his refugee work long before he ever became the Governor of Anambra State. He has been to Afghanistan, Rwanda, and Haiti doing refugee work as his contribution to alleviating the plight of citizens of the crisis ravaged countries. When Haiti was almost wiped out by hurricane, he donated and coordinated his friends to raise about Two Hundred Thousand Dollars ($200,000.00) to salvage the poor black Caribbean nation.

His 100 Million Naira donation to Bishop Shanahan College in Enugu State is one of many such interventions in schools within and outside the Southeast.

As Peter Obi will always say, being in politics is not only about contesting and winning elections but finding ways to touch lives positively in or outside government,”

Peter Obi has so far visited over 150 schools, which included about 40 health institutions, across the federation. He has committed millions to social, educational and healthcare projects. Part of his pastimes is visiting hospitals quietly to defraud bills of indigent patients.

Peter Obi is open to new ideas and new strategies, as long as they do not conflict with his well rooted Godly principles in prudence, humility and impactful philanthropy. He shall welcome ideas on how to alleviate any humanitarian situation, but would not bring himself into the showiness that has defined some ill-motivated philanthropy.

Finally, we urge our supporters to please respect the revered clergy’s opinion and appreciate his right to hold such.