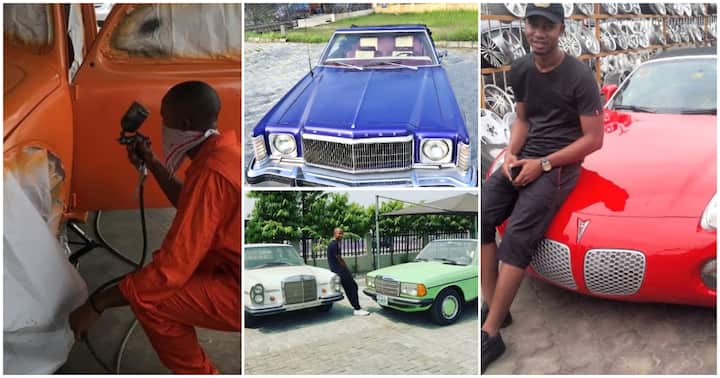 Afam Kings Dozie, is a talented young man who has carved a niche for himself in refurbishing old cars.

His creative works have blown so much that popular celebrities like music stars and producers have joined his growing clientele list. Kings recently opened up on his car refurbishing job and why youth should go into it.

Afam Kings Dozie was born to the family of Mr and Mrs Paul Dozie in Otukpo Benue state but they actually hail from Nnewi North LGA in Anambra state. Kings stated that he became a mechanic at the age of 10 as his dad owned a workshop.

And from apprenticing with his dad, the young man developed a passion for cars and how they are made.

As he grew in knowledge on fixing cars, Kings said he soon began loving fabrications and how things are remodelled with metals. His passion was also fuelled by his father who helped him with books related to the profession.

It was at this point, Kings decided that he was going to venture into refurbishing cars as it is something that stands out.

“The mindset of looking different got me into refurbishment, so since I was already a mechanic, I made a choice of going into what stands out in the field of work, so I had revamping as my only way to exercise the idea.

“It started with my love for fabrications and remolding things with metals, which my dad is there to guide me and he provided me books to grow my knowledge at that time, while he teaches me practically.”

When asked how he gets the vintage cars and other whips he refurbishes, the young man said:

“I scout for these cars, I traveled to so many states, made friends with old mechanics, drivers and some individuals, and told them to hit me up if they come across any vintage car.

“So these are people that search for me, once they get one, they call me, I negotiate, then pay, and make arrangements of how it gets to Lagos. Then I commence work on it.”

Upon the completion of his secondary school education, Kings stated that he proceeded to Nnamdi Azikiwe University (UNIZIK) to read mechanical engineering.

He however dropped out in his 200 level because he wasn’t getting the needed practical and expected knowledge. Kings then went to New Delhi in India where he honed his skills and he says dropping out actually inspired him. Explaining this, he said:

“…Because the mind of challenging my peers in school was a reminder.” It is noteworthy that while in secondary school, Kings was enrolled in a technical school where he was trained in mechanical engineering as well.

Since his return to Nigeria in 2011 after his studies in India and started properly in 2012, business has been moving fine for Kings. The likes of producers Clarence Peters, Unlimited LA, Mex films, Adasa Kuki, Avalon Okpe, Aje production, Director K and TG Omori have employed his services for video shoots. 10 years down the line, Kings said it is a profitable venture. He not only refurbishes cars but rents them.

Kings speaks on sentiments that refurbishing cars is ‘intellectual theft’

While encouraging youths to go into refurbishing cars, Kings reacted to views that revamping whips amounted to intellectual theft of sort. He said:

“For me it is not an intellectual theft, because everyone has a choice of restoring or let me call it changing existing idea to suit his/her want.

“Innovation! People who buy already built houses also do the same. So I feel it’s a choice thing.”