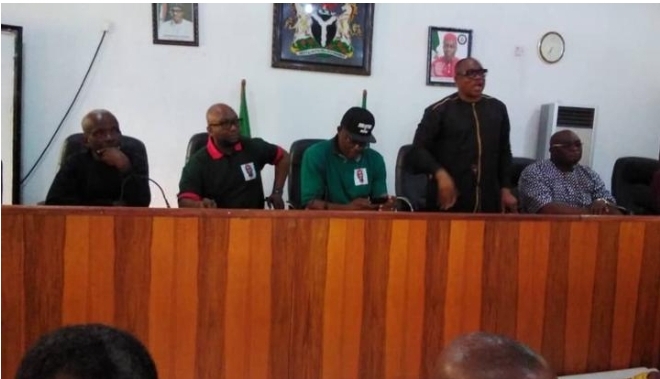 The Anambra State Commissioner for Commerce and Industry, Dr Obinna Ngonadi, said that the state government would not hesitate to demolish all illegal structures erected in market spaces without approval from relevant authorities, ANAMBRA PEOPLE reports.

Ngonadi made the disclosure in a meeting with market leaders held on Friday, at the Government House, Awka.

He said that some structures erected are not in line with government policy on cleaner environment and have no approval from the State Physical Planning Board.

Tribune Online gathered that the most affected markets are Onitsha and Nnewi markets respectively.
Speaking further, the Commissioner expressed displeasure at some executives who collect bribes from developers and give approval for construction and extension of shops, thereby causing environmental infractions and nuisance in the markets.

He also frowned at traders who displayed their wares on the tarred roads, blocking gutters and drainages with their garbage, and at the same time causing obstructions on the roads.
Dr Ngonadi asked market leaders to meet with ASMATA Leadership to set a time frame for all markets to decongest all roads within and around their locations, stressing that street trading outside markets is illegal.

He warned that government will embark on inspection and enforcement of the directives as soon as the time frame elapsed, and will remove the executives of any market that contravened this directive.

He further disclosed that the State Government has introduced a digital revenue collection system that will be deployed across all markets to ensure that government can collect all its revenue directly into its account, and explained that payment kiosks would be provided for those who cannot use the digital model of payment to be assisted in paying their taxes and levies.

He implored them to assist the government in ensurimg that the system of collection is successful as the Soludo administration has plans to upgrade infrastructure within and around markets to ensure that traders’ welfare is taken care of.

Addressing the meeting also, the Commissioner for Local Government, Chieftaincy and Community Affairs Mr Collins Nwabunwanne further harped on the need to achieve  a beautiful and clean Anambra.

He asked the market leaders to clear vehicles that are abandoned on the tarred roads to make way for free flow of human and vehicular movements.

“Any leader that fails to comply with this governor’s directive proves that he has no capacity to lead the market,  and should make way for a capable hand.

He said the aim is to block revenue leakage  and to ensure that a larger percentage of government revenue gets into government coffers for effective use.

The chairman called on market leaders to educate traders on the new system.