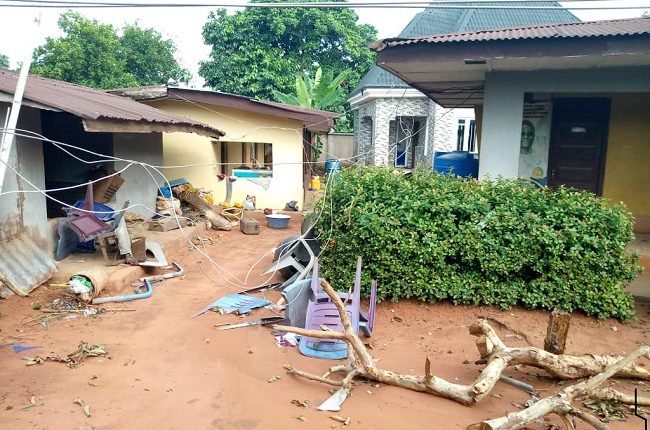 Hoodlums suspected to be cultists have launched an attack on the traditional ruler of Ebenebe, Awka North Local Government Area of Anambra State, Igwe Christopher Nnaegbune and some of his subjects, vandalizing some properties worth about N25 million.

This was barely five months after a suspected cult group attacked and killed about twenty persons at a burial ceremony in the same community.

ANAMBRA PEOPLE gathered that the incident occurred between 10pm to 12 midnight Monday, June 27, but no life was lost.

“Hoodlums numbering about 100 invaded the palace of the traditional ruler of Ebenebe, Igwe Christopher Nnaegbune around midnight on Monday. The Igwe had gone to sleep. They came prepared for war; some were beating Ogene (metal gongs), while others shot sporadically on air.

“When no one could open the gate for them, they forced it open, using their clubs and other dangerous weapons. However, they met no one outside the premises. After making noise, they left,” the source stated.

It was also gathered that the hoodlums same night, first visited the compound of the late Chief Okoye family at Obuno village, Ebenebe in search of a youth leader, Mr Chukwujekwu Okoye, during which they vandalised Almaco doors, windows, chairs, generating set and other properties in the two buildings in the compound.

Although there was no information to show why the attack was launched on both people, a source, who claimed to be awake when the incident occurred, said he overheard the hoodlums saying they came to kill a member of the family, Mr Chukwujekwu Okoye.

According to the source, Chukwujekwu, who is the Chairman of Obuno Village Youth, always used security men to chase away hoodlums from the community, and the monarch was also against their nefarious activities.

An eyewitness and member of the family, Mr Festus Okoye, said he narrowly escaped death on the day of the incident, as the hoodlums, on discovering that he was inside one of the rooms with his family, ordered them to come out.

“Our life is in danger. When they forced our entrance gate open, they went around our compound, destroying all the Almaco glasses and doors to see if there are people inside any of the rooms.

Collaborating this, Mr Chukwujekwu Okoye, who has gone hiding since the incident, said he has reported the matter to the police, and called for government intervention to nip crime in the bud in Ebenebe, as his life and those of his family were in danger because the hoodlums were still threatening to kill him.

When contacted, the Traditional Ruler of Ebenebe, Igwe Christopher Nnaegbune, admitted that there was an attack on his palace by hoodlums on the said date, but promised to provide details later.