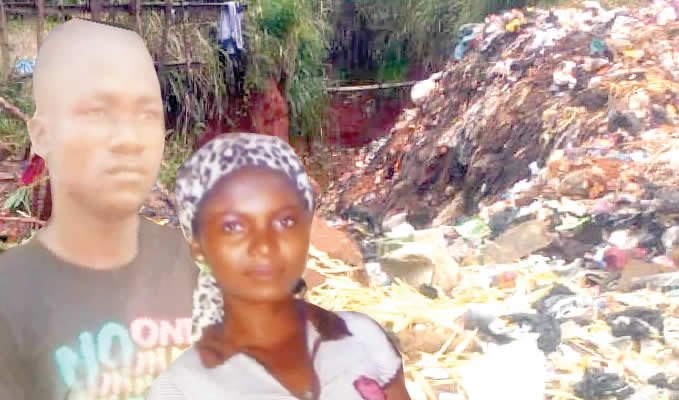 Losing a child is painful not to talk of experiencing such in a terrible way. For 40-year-old Chinwike Mosolo and his wife, Gloria, 36, last Thursday’s tragedy that claimed their third child, Izuchukwu, would remain unforgettable to them.

The eight-year-old, Izuchukwu, died when a surging flood from behind the school of Nursing, Nkpor in the Idemili North Local Government Area of Anambra State, swept his feet and flushed him into deep erosion.

The boy was said to be returning home while it was raining, together with his mother when the incident happened. His corpse was later found the following day at about one kilometre away from where he plunged the previous night, with one of his hands cut off. This was after futile rescue efforts by some youths in the community.

More casualties were averted when the victim’s mother, with a baby strapped to her back, attempted to jump into the gully to search for her child. People in the neighbourhood prevented her. Prior to that incident, flooding in the area was said to have claimed other lives including two older siblings of the latest victim.
While some members of the community blamed the state government for allowing the gully to expand from a minor pothole to a big gully over the years, others said the boy would not have died if the mother was more careful.

Talking about the incident to Saturday our news source at his residence on Akundiriwa Street, Nkpor, near Onitsha, Mosolo said that life had been cruel to him and his wife because they couldn’t understand why they had to lose three kids in the same way.

Mosolo, a tyre repairer, who hails from Ezeagu LGA of Ebonyi State, said his wife attempted suicide twice after they returned from where they went to bury their son who was the latest victim of the flooding. He, however, noted that she was timely rescued on both occasions by neighbours who co-incidentally arrived at the scene promptly.

He said that the situation made him stay at home more and watch over his wife and the surviving child.

Speaking amid tears, Mosolo lamented that out of four children, he was now left with only one child.
He said, “Izuchukwu and his mother, who is a tailor, were returning from the shop that evening while it was raining. As they approached the gully, he quickly freed his hand from the grip of his mother and started running towards the gully while the mother ran after him. It led to the loosening of the wrapped used to back the baby.

“It is cruel losing three children to flooding. The mother wanted to grab him but also had to save the child who was nearly on the ground. At that moment, Izuchukwu had approached the gully and in an attempt to jump was swept by the surging flood and he plunged into the erosion. We buried him at our hometown in Ebonyi State on Monday. We returned on Wednesday
“I don’t know why my late son had to loosen from the grip of the mother and started running to where he met his death. Well, I thank God for everything. He alone knows why things had to turn out that way.”

He blamed successive governments in the state for the calamities that had befallen his family, saying that abandonment of the road turned what used to be “ordinary potholes” into big gullies.

He pointed out that since he started living in the community over the last 20 years ago, only the regime of a former governor of the state, Dr Chris Ngige, who is now the minister of labour, carried out some works on that road.

He called on the governor, Chukwuma Soludo, to consider the lives lost to the gully and look into the situation to alleviate the sufferings of the people.

Contacted, the state police spokesman, Tochukwu Ikenga, said he was not aware of the incident as the case was not brought to the attention of the police,

Ikenga however advised parents of the victim to lodge a formal complaint at the nearest police station for investigation to be carried out.

Asked why he didn’t report the incident to the police, Mosolo said, “I felt there was no need to make any complaint at the police station as doing so will not bring my son back to life. All I need is for the authorities to do the needful by fixing the road. My wife has been crying and remained inconsolable since we returned from where we went to bury my son. I have closed my shop till further notice to avoid her attempting suicide. I don’t know when this will end.”

The bereaved mother, Gloria, who was still in a troubled state said that the scenario that played out between her and her late son was like a film and still remained a mystery to her.

Wondering how her son managed to break away from her grip on the night of the incident, Gloria said the boy would have been alive if he listened to his calls while he was running towards the erosion area.

She said the same fate befell two of her other children as they also plunged into the gully during rainfall on their way from school.

She stated, “The same thing happened to two of my other children when they were returning from school some years back. It is so sad. Please, I can’t talk about it anymore because doing so breaks my heart.

“My son Izuchukwu was everything to me since we lost two other of his older siblings. He told me he wanted to be a medical doctor and we assured him that we were going to help him fulfill his dream. But look at what has happened. He died without fulfilling his dream.’’

Gloria also lamented that her means of livelihood was threatened as the shop, where she does tailoring, was also affected by erosion.
She added that there was not enough money with them to rent another shop at the moment, stating that her baby who fell on the night she pursued Izuchukwu when he headed for the gully got injured.

She stated, “I am still in serious pain and shock at the moment. Even when I recover, there may not be anything to fall back on for now as floods entered my shop and destroyed my sewing machines at the time we went to bury our son. My husband’s vulcanising work is also not thriving. We plead with kind-hearted individuals to come to our aid. We are passing through a traumatic period and need help. We hope that society will help give us a sense of belonging. The classmates of Izuchukwu came to commiserate with us after we returned home from where we went to bury him.’’

A community member and a former Chairman of the Nigerian Bar Association, Idemili branch, Mr Samuel Chukwukelu, noted that past governments in the state abandoned the community in the area of road rehabilitation.
Chukwukelu said the contractor awarded the road project from Our Ladies road through Uke Street to Attah Road linking Nkpor/Umuoji Road, abandoned the project half way at the erosion prone area, where the incident happened.

The abandonment of the area, he said, widened the erosion site and deepened by the surging floods and now being converted into a dump by the residents.

“The death of the boy was unwarranted and unfortunate. If past governments had done the needful, this would not have occurred,” he said.

In his reaction to the incident, the Press Secretary to the state governor, Christian Aburime, acknowledged the poor state of the road, but said that the state government had declared a “state of emergency” on the road and that work would commence after the rains.

He said, “We are moving to the next stage of making Anambra a livable and prosperous smart mega city by confronting head-on the infrastructural decay. The road infrastructure in our state is in such a deplorable situation that the governor has declared a state of emergency on the road.”