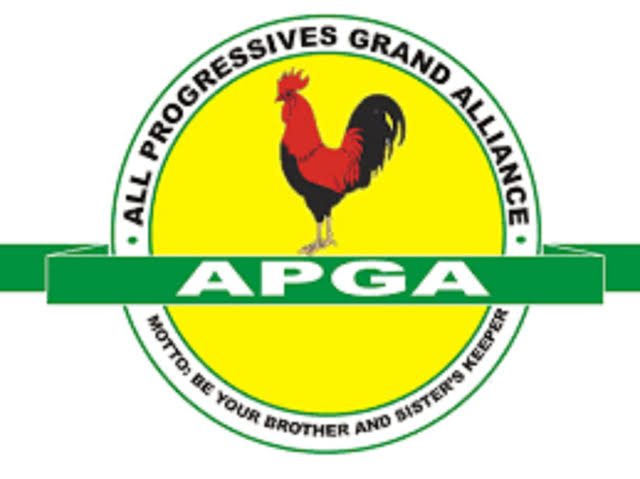 This piece presents the reading public with an insightful summary of how the legal fireworks of APGA leadership tussle commenced and ended in favour of Chief Edozie Njoku, as the National Chairman of APGA.

Please find attached all supporting documents; with areas of concentration and court judgments carefully highlighted for your kind perusal.

A. On June 6, 2019, Oye filed Suit No. FCT/HC/2086/2019 at Jabi, Abuja. In the said matter, Oye took Chief Edozie & APGA to Court. Please find attached are the Court Orders Oye obtained against Chief Edozie Njoku & APGA marked as Annexure ‘A’.

B. Abundantly, Oye served the Court processes on Njoku & APGA at the APGA National Secretariat as his last place of business. Annexure ‘B’ is Oye’s letter of withdrawal from the FCT High Court case which he instituted. Annexure ‘C’ is the Order of the Court vacating the Orders against Chief Edozie & APGA, thereby providing Njoku the legal grounds to return to his position as the RIGHTFUL National Chairman of APGA.

C. Interestingly, Oye abandoned the FCT High Court case, when APGA filed Counter claims against him that he is not the National Chairman which has not been vacated till date. Curiosity demands that we query why Oye instituted a case against Edozie Njoku & APGA asking the Court to stop Chief Edozie Njoku from parading himself as the National Chairman, and also to stop APGA from recognizing him, if he was not convinced that Njoku is the authentic National Chairman?

D. On June 30, 2021, Justice Musa Ubale of the Jigawa High Court in Suit No. JDU/022/2021 made 2 vital declarations:
-That Chief Edozie Njoku was elected as the National Chairman of APGA on May 31, 2019 at the Owerri Convention.
-That Chief Edozie Njoku was the National Chairman whose suspension was in contention.
-Observably, Victor Oye was not a party to Suit No. JDU/022/2021, because, there was neither the mention of his name as the suspended National Chairman or the purported Awka Convention of May 31, 2019.
-Instructively, it was this very matter that moved up to the Supreme Court. Oye was never mentioned at the Jigawa High Court. See Annexures ‘D1’ & ‘D2’ (Jigawa State Judgment-page 1&11).

E. APPEAL COURT JUDGMENT (Appeal No. CA/KN/146/2021)-
At the Appeal Court in Kano, the Justices noted with regret that Chief Edozie Njoku whose position is being contested ought to have been joined both at the trial court and the Appeal Court, but was never joined. See Annexure ‘E’ for the Appeal Court Judgement (Page 78).

F. SUPREME COURT JUDGEMENT- (SC/CV/687/2021)
-Hon. Justice Mary Peter – Odili stated as follows;
‘that the National Chairman Chief Edozie Njoku’s suspension at the trial court is not justiciable. See Annexure ‘F’.
-Hon. Justice Mohammed Lawal Garba, clearly stated that ‘the event which is the National Convention of APGA took place at Owerri, Imo State where Njoku and others were elected. Annexure ‘F2’.
-Justice Ibrahim Musa Saulawa stated that the Court (Supreme Court) has restored the parties to the position they were prior to the offending action.’ see Annexure’F3′
That is, that Chief Edozie Njoku has been restored to his original position as the National Chairman of APGA, before his purported suspension at the trial court (Jigawa High Court). Please, for benefit of doubt the Supreme Court document was certified by the Supreme Court Registrar, Olugbenga O. Onodolu.

G.FHC JUDGEMENT (Suit No: FHC/BAN/CS/10/2020)
At the FHC Abuja, the Judge in Ruling on the issue of representation of the APGA affirmed that C.N. Nwagbo Esq is the authorized Counsel to represent APGA. C.N. Nwagbo was hired by the National Chairman, Edozie Njoku & the National Legal Adviser, Barr Buba Hamman Ghide. See Annexure ‘H.’
On page 9 of his Ruling, the Judge recognized the Certificates of Return issued to all the National Officers of APGA elected at the National Owerri Convention; thereby giving a nod to Edozie Njoku’s National Executives of APGA. See Annexure ‘I’. The Judge equally recognized Chief Edozie Njoku & Barr Hamman Ghide as the rightful National Chairman and Legal Adviser of the APGA consequent upon C.N. NWagbo Esq. appropriate representation of APGA. See Annexure ‘J’.

Conclusively, with the above documentary evidence, it is simpleton for anyone to allege that these documents were forged. They are merely playing on the gullibility of the masses.

Thanks for your time. 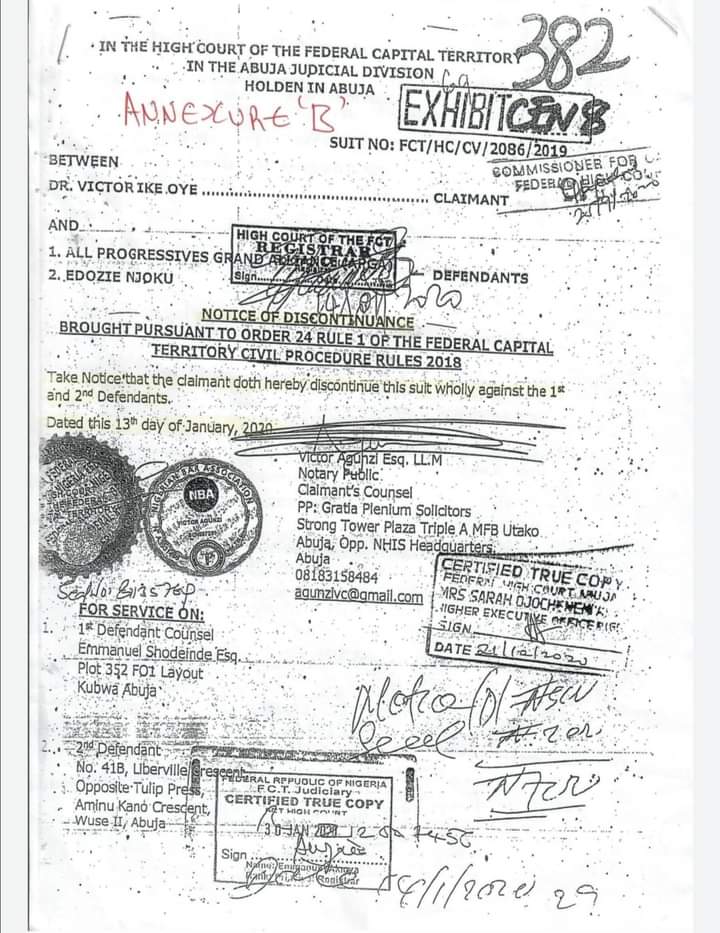 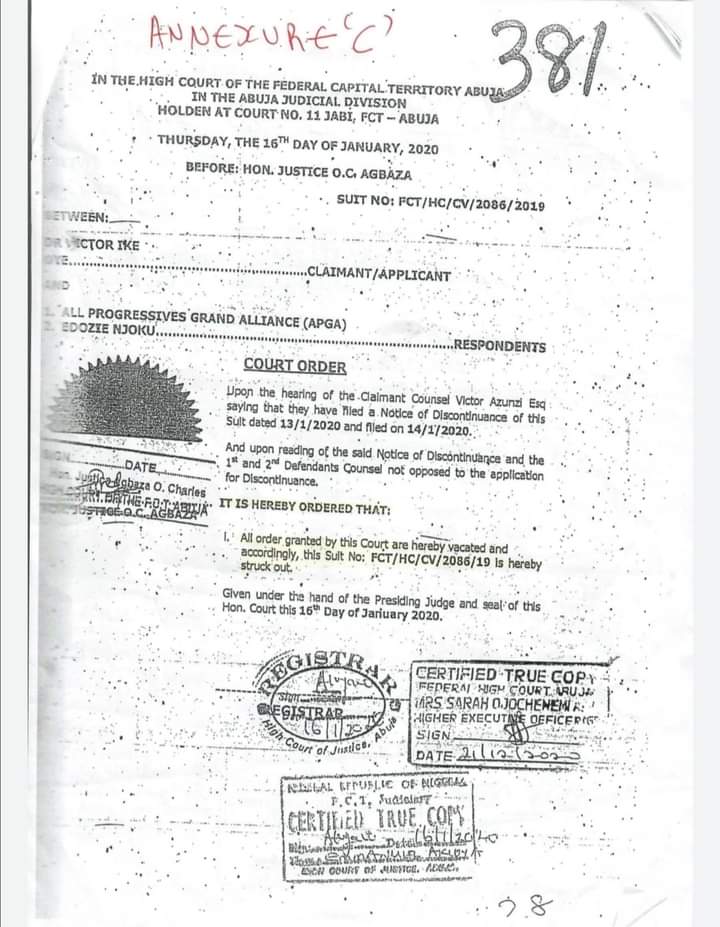 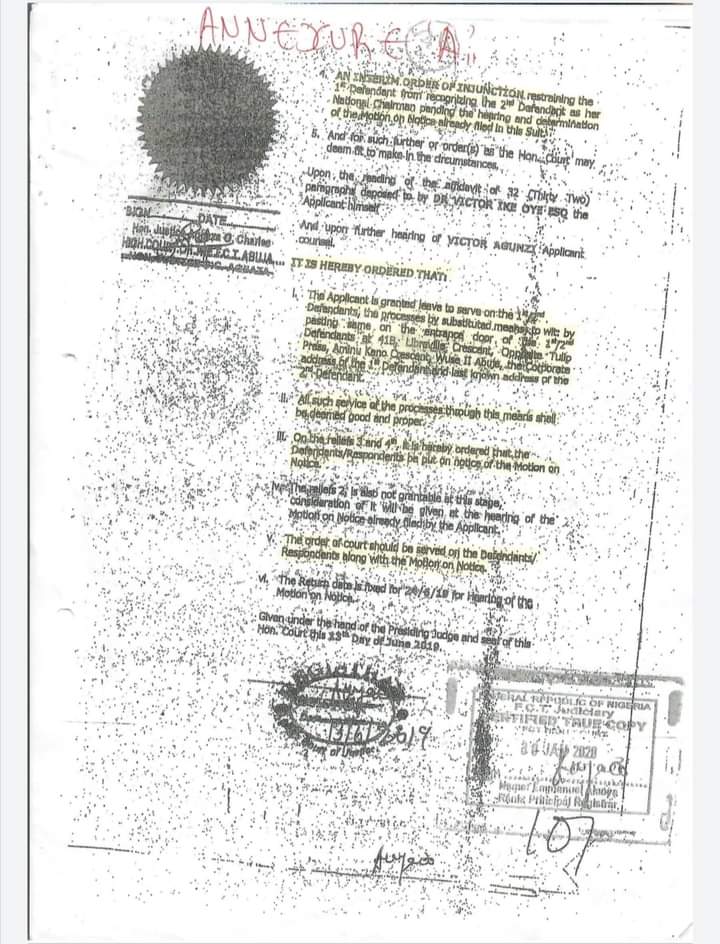 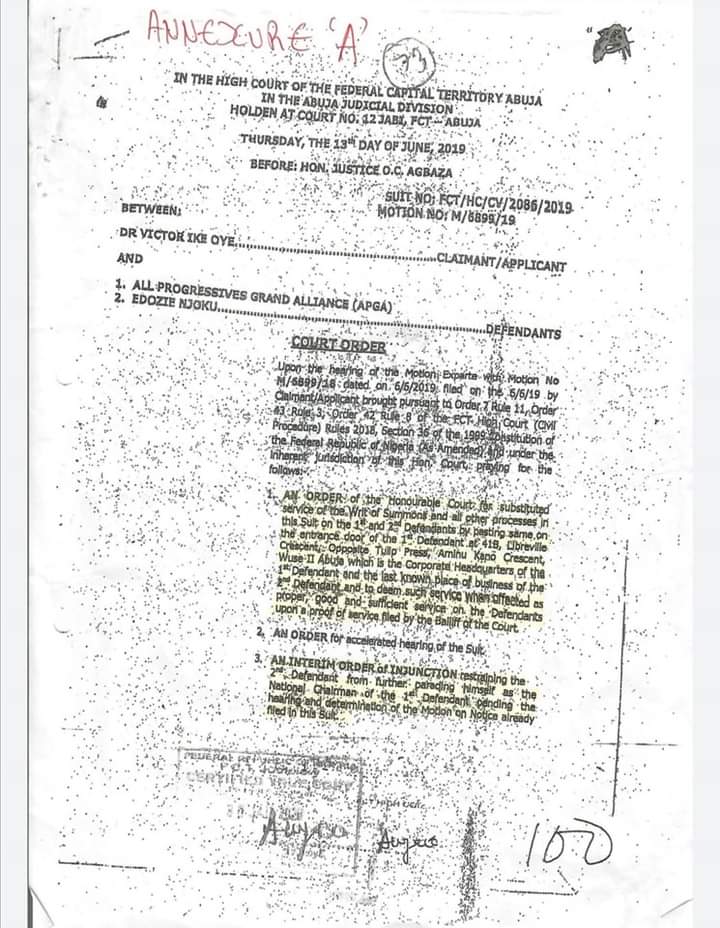 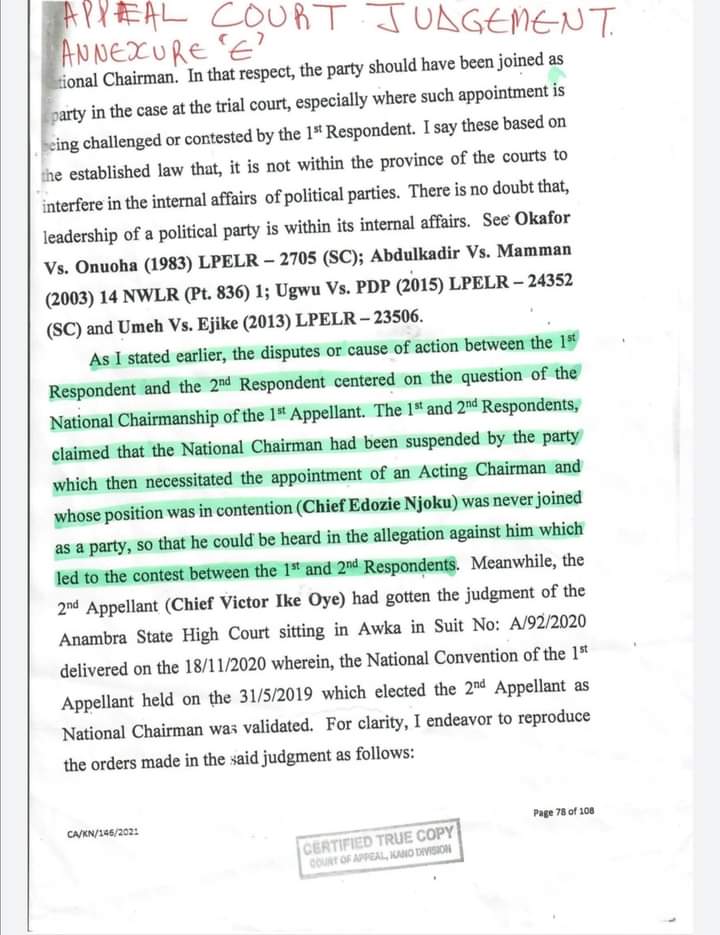 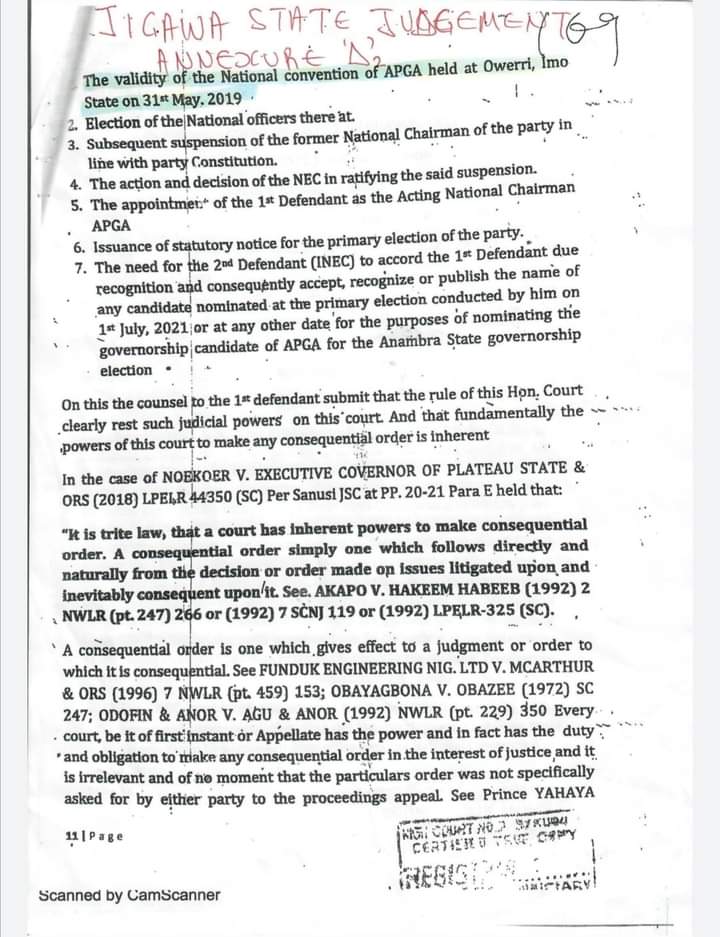