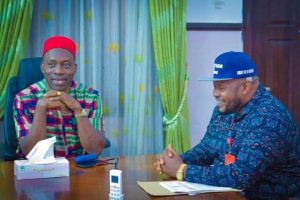 For effective governance, Governor Chukwuma Soludo has continued to explore ways through which governance will be more impactful at the grassroots, ANAMBRA PEOPLE reports.

The governor believes that considering how women have become agents of development the world over, there is nothing wrong in bringing them in to play bigger roles in leadership particularly at community level.

Soludo first made the suggestion during a meeting with the executives of Anambra State Town Unions (ASATU) led by Barrister Titus Akpudo (Ichaka), recently, where they discussed issues about welfare and development of various communities across the state.

Also on a Facebook post, Governor Soludo said he made the suggestion of electing women as President Generals of town unions as a way of deepening women participation in leadership activities across the state especially at community level, asking: “Why can’t we have women as Presidents General of communities?”

Reacting to the poser, President-General of Ojoto Town Union Chief Donatus Anozie Ezemadike, said it depends on the constitution of each town unions, that of his town, provides for the existence of women wing, an affiliate of the union which women are free to join and contribute in community development matters.

But to Mrs Ifeoma Aroh, a woman leader in Abatete, there’s nothing wrong with having women as PGs of their various communities.

“The position is purely an administrative one and not in any way a cultural position. Today, women take up other administrative positions like VCs, Ministers, senators, governors and chairmen of local governments and if women are excelling in most of these demanding positions, what is so difficult in them becoming PGs of their various communities? She queried.

The governor who was thrilled by the reactions the poser generated stated that he hoped to have a fruitful conversation on that at an expanded fora. “I am interested in having this conversation even though I got responses from them already captured in an earlier paper I wrote some time ago. We will surely get back to this as promised,” the governor concluded.