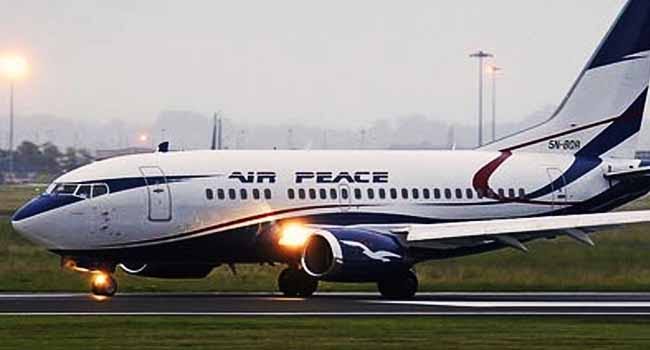 China’s main transport and trading hub, Guangzhou has received the inaugural flight by any Nigeria airline, an Air Peace Boeing 777 aircraft with 240 passengers onboard to connect the two countries in continuation of their bilateral trade and travel relation.

ANAMBRA PEOPLE gathered that the flight from the new international terminal of the Murtala Muhammed Airport in Lagos was heralded by fun fair by the Chinese community in Nigeria led by Mr Rush Wang, Zhou Jwn and Xia Liang Ying in company of Nigeria government officials and representatives of the Federal Airports Authority of Nigeria FAAN the aircraft was airborne at 22:00.

Chief Operating Officer of Air Peace, Mrs. Oluwatoyin Olajide, said the Guangzhou operation is the springboard for further launch into India and Israel the airline aims to commence soon.

Oluwatoyin affirmed the airline’s fleet modernization remains its priority as it continues its network expansion drive across the globe.

She told the jubilant crowd that “the flying public, especially those that fly the Guangzhou route, should expect best-in-class flight experience, which is characteristic of the Air Peace brand. We’re not stopping with Guangzhou- India is next and Israel is in the works. Also planned for subsequent launch are Malabo in Equatorial Guinea and Kinshasa in the Democratic Republic of Congo.”

“We will continue to grow our route network as well as modernize our fleet strategically. Air Peace currently boasts of a network of twenty domestic routes, seven regional routes and two international destinations, including Dubai and Johannesburg,” she said.