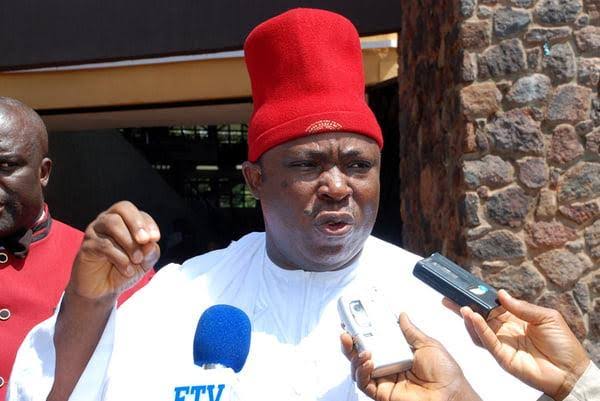 Despite a low turnout, the meeting, held at the Golden Tulip Hotels in Agulu, the hometown of Labour Party Presidential Candidate, Mr. Obi, ended in an embarrassing walkout by stakeholders on Victor Umeh and his Labour Party.

It was reported that many Anaocha stakeholders had boycotted the meeting due to its agenda, which was to adopt the Labour Party in Anaocha ahead of 2023. The only fifteen (15) people who were present included Chief Daniel Ogbuefi, Aniagboso, Azodo, Onyeanwuna, Ozoma from Aguluzigbo, Senator Victor Umeh, Nkeachi Ogbuefi, High Chief Ben Obi, Mbuze Agulu, and others.

One of the major stakeholders who spoke to our correspondent after the walkout, High Ben Obi, mbuze Agulu, and Igwe APGA, narrated briefly what had happened. Anaocha’s number one stakeholder, stated that they stormed out of the meeting because Victor Umeh, who was present, attempted to impose the Labour Party on them in the name of supporting Peter Obi and various candidates of the party in Anaocha.

According to Mbuze, the stakeholders became enraged and had to shout Umeh down. This resulted in their leaving the hall in protest.

“The people of Anaocha have long rejected Victor Umeh, who intends to exploit Obi and the Labour Party’s popularity to persuade them to support his tainted senatorial ambition.”

Chief Ben Obi stated that the low turnout was due to pre-information that the meeting was being convened by Victor Umeh through proxies and that he wished to use Peter Obi’s name to achieve his ambition. Mbuze stated further that the majority of Anaocha stakeholders refused to attend the meeting due to Victor Umeh’s direct involvement.

“We have repeatedly warned our son, Peter Obi, not to get too close to Victor Umeh, who has no good intentions for him or his new Labour party.”

“Umeh would be wrong to use Peter Obi to impose himself and the Labour party on us. We all belong to different political parties and are interested in different candidates who want the best for our Anaocha people.”

“Many people in Anaocha and beyond are already tired of the Peter Obi presidency because of Victor Umeh perching around him.”

“Obi’s aspirations will only be hampered by Umeh, who is not marketable. Obi must stop hanging out with a character like Umeh, whom everyone has rejected.”

Mbuze insisted that he is an APGA member and will support Peter Obi, but he will not defect to the Labour Party or let himself be duped into backing Umeh, as the former Senator was insisting during the meeting. He claimed that the entire Anaocha people shared the same viewpoint.

He forewarned Peter Obi that if he sticks with Victor Umeh, whom the Anaocha stakeholders and assembly have rejected, he will be infected by the Umeh bad influence.

“We cannot allow Victor Umeh to prey on the popularity of our son and brother, Peter Obi, and dupe us into joining the Labour Party, with which he intends to stage a comeback to challenge for Anambra state government house; the people are already aware of his plot and are vehemently opposing him.”

“Anaocha people will support Peter Obi overwhelmingly, but we will not, for any reason, extend such support to Victor Umeh.” Peter Obi must not forget his past with Umeh and how the latter nearly destroyed him politically,” Mbuze concluded.

1 thought on “Anaocha Stakeholders Walked Out On Victor Umeh and the Labour Party.”