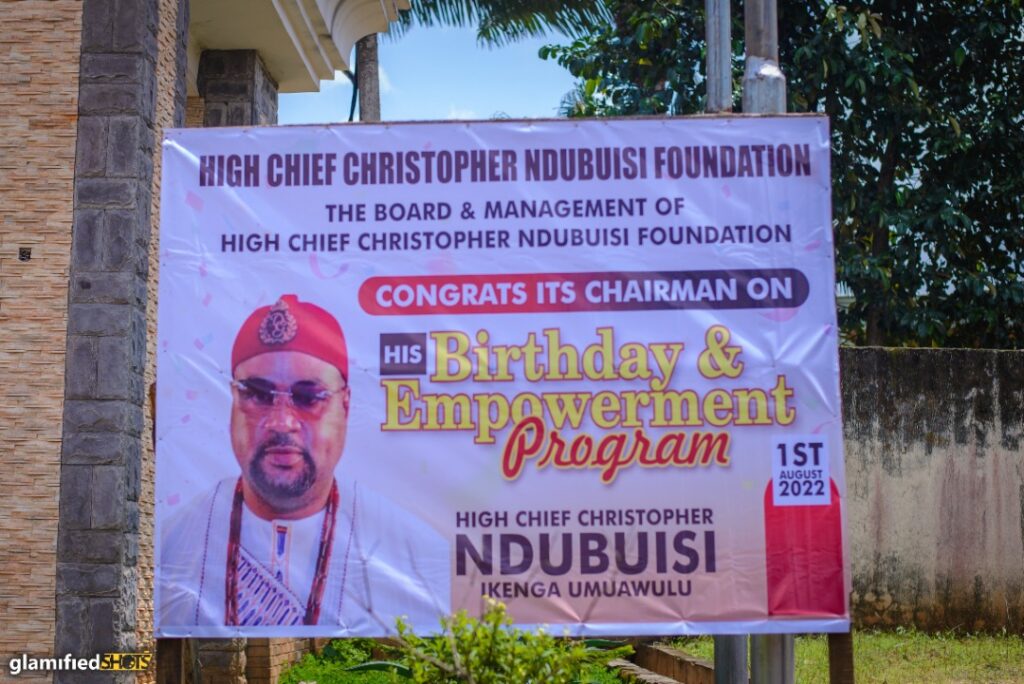 As part of activities to mark his birthday, Anambra born construction guru and Philanthropist extraordinaire, High Chief Christopher Ndubuisi (Ikenga Umuawulu) has empowered over 40 persons from his Umuawulu Community and neighboring villages, ANAMBRA PEOPLE reports. The Abuja based businessman who marks his birth anniversary 1st August every year decided to commemorate this year’s birthday by putting smiles on the faces of his kinsmen.

Speaking at the event, the Parish Priest of Saint Joseph’s Catholic Church, Umuawulu, Reverend Father Benjamin Odika, showered encomium on the celebrant, High Chief Christopher Ndubuisi and commended him for always coming to the aid of Umuawulu community and other neighboring communities even without being called upon. He praised him for the way he has always used his resources in serving God and humanity and called on youths to prepare themselves for the future through education, diligence and acquisition of necessary skills, as according to him, there is dignity in labour.

Father Odika, who is also the chairman of “High Chief Christopher Ndubuisi Foundation”, noted that the foundation is aimed at ensuring equitable and judicious distribution of the founder’s resources to the needy and deserving beneficiaries, adding that there are measures put in place to ensure that the beneficiaries put the items to good use.

Father of the celebrant, Chief John Ndubuisi, stated that the gesture from his son who is a well-known philanthropist in Umuawulu and beyond has been ongoing. He urged beneficiaries to utilize this golden opportunity and maintained that such opportunities does not present itself all the time.

Similarly, the benefactor’s Chief of Staff, Chief. Patrick Ezewudo (Agbalanze) added that apart from the business empowerment, there were other beneficiaries who have been penciled for overseas scholarship and are billed to leave once they are done with their documentations. He charged all the beneficiaries including those on scholarship, to put all they have received to good use.

Some of the beneficiaries said items received will help them to improve their living standards, and prayed God to sustain His blessings on High Chief Ndubuisi.

Recall that High Chief Christopher Ndubuisi had on the 8th day of May, 2022 presented a whopping Sum of N10 million to 20 beneficiaries,(young entrepreneurs) through his town union, Umuawulu Progressive Union, UPU Abuja Branch.

High points of the event were cultural dance performance, cutting of birthday cake and presentation of equipment to the beneficiaries.