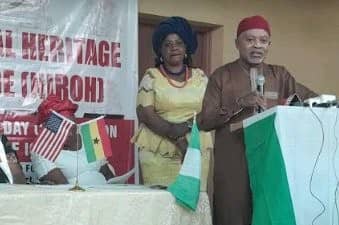 The President General of NIROH Worldwide, Dr. Paul Okoye who spoke yesterday in Awka after unveiling the plans in Abuja noted that the event is billed to bring all Igbos together and seeks to reinvent a new direction for the people.

Okoye who lamented that most things the ethnic group was known for were fast eroding, making it difficult for them to speak in one voice and forge common political front.

Okoye disclosed that NIROH Worldwide under his leadership re-instituted the unity day festival aimed at unifying the Igbo nation, saying the event would be a weeklong celebration beginning from Monday 28, November 2022 to Sunday December 4, 2022.

He named the highlights of the programme to include: The Marathon, The Great Homecoming, Wrestling and Folklore and the Igbo Day Pre-conference.

Okoye going back memory lane, said the event was designed also to rebuild the bridge that was broken in 1966 and initiate the process of healing the land, especially, in the realization that no ethnical component of Nigeria can go it alone.

He said the aim was not to apportion blame but to try to repair that which had been destroyed, maintaining that the North before the civil war used to be the closest ally of the Igbo nation underscoring the need to reinvent the friendship.

Continuing, Okoye regretted the erosion of culture and tradition of Ndigbo by extremists, cautioning that action must be taken immediately to reverse the ugly trend.

He complained that that Igbos were losing grip of their children and money tends to be the in thing.

Okoye said the region is at the verge of passing as a people without history or cultural identity.

“We as a people must accept that our culture is being bastardized in the wholesome acceptance of the western culture and Europeanization of our populace in the process of neocolonialism.

“The total erosion of our culture and tradition by extremists has to be checkmated without further delay. We are losing grip of our children and money tends to be our God. No respect for elders.

“We are at the verge of passing as a people without history or cultural identity. Our language is suffering near extinction and nobody seems to be proud to associate himself with Igbo origin.

“As the Holy Scripture says, let’s give to Caesar what belongs to him and to God what is His.

“The reclaiming of our cultural heritage is a task that must be done. All hands, therefore, must be on deck to leave a bequeathing legacy for the succeeding generation” he said.