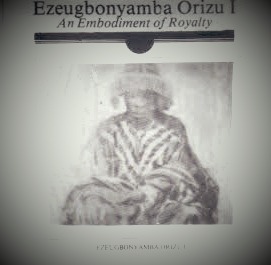 He was the 18th Obi of Otolo and the Igwe of Nnewi kingdom. He was the traditional supreme ruler and spiritual leader in Nnewi. Eze Ugbonyamba was crowned the King of Nnewi and he took the ofo of Nnewi after his father’s death in 1904. He was a member of the Nnofo Royal lineage and the successor to his father Igwe Iwuchukwu Ezeifekaibeya.

Igwe Orizu I (Eze Ugbonyamba) died in 1924 and was succeeded by his first son Igwe Josiah Orizu II . One of remarkable events of his reign was the arrival of the British in 1905.

Nnewi thrived during his reign through land gains from neighboring towns like Ichi through wars, He also resettled soldiers in Abubo, Nnewiichi & Akabukwu. His reign marked the beginning of Christianity in Nnewi and his family and people would later gradually become Christians. He took the prestigious Nri Ozo title, with the Ozo name, ‘Eze Ugbonyamba’

Eze Ugbonyamba was the first Anambra man to own a personal pleasure car. When the car was brought for him from Lagos, the European Provincial officer at Onitsha was invited to see the vehicle and share with the chief in his joy. He came to the palace on a motorcycle, inspected the car which, thereafter, had ON1 (that is Onitsha 1) as its registration number. Thus, it was the first car in Onitsha Province and, probably, in all Eastern Region of Nigeria.