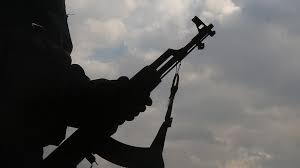 The unidentified businessman was reportedly killed Monday afternoon, about 3:45 pm by hoodlums suspected to be gunmen working for a separatist group in the South East, Nigeria.

According to sources, the businessman was shot dead when he gallantly resisted being bundled into a vehicle by the assailants who stormed the town in the afternoon.

Monday has been a Sit-at-home day in the South Eastern states and Anambra which had been characterized by killings and kidnapping.

When contacted, the Police Spokesman for Anambra State police command, Ikenga Tochukwu said he had not received a report of the sad incident adding that he would contact the police in the area.

“I haven’t received such a report. I will contact them and give feedback”, the PPRO said.