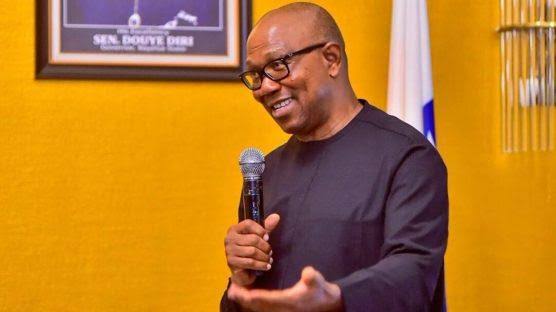 A frontline Senatorial Candidate in Anambra Central for the 2023 election, Senator Victor Umeh, has described the presidential candidate of the Labour Party (LP) and former Governor of Anambra State, Peter Obi as a youth-friendly politician, ANAMBRA PEOPLE reports.

According to a report by his media assistant, Charles Ifeanyi Obi, Senator Umeh who is flying the Labour Party flag in the Anambra Central senatorial contest, spoke at the celebration of the 2022 World Youth Day with members of the Catholic Youths Organization of Nigeria (CYON), St. Andrew’s Catholic Church Adazi-Nnukwu, Awka Diocese.

The event which started with a Holy Mass presided over by the Bishop of Awka Diocese, Most Rev. Paulinus Ezeokafor also had series of outdoor activities which included march-past parade, installation of patrons and patronesses, cathedraticum and different kinds of entertainments.

Senator Umeh in his speech expressed the goodwill of the Labour Party Presidential Candidate, Peter Obi for the youth and the clergy as well as for the entire congregation.

He congratulated them on the auspicious occasion and urged them to eschew every immoral acts and social vices that puts the youth in a bad light.

The Anambra Central LP senatorial candidate charged the youths to proactively participate in the 2023 General Election in order to elect only credible leaders and representatives that have the fear of God and would make them proud in the process of governance.

He further stressed that Obi, the LP presidential candidate being a friend of the youths has placed their welfare as top in his agenda to positively turn around the fortunes of the country. He implored them to unanimously and actively support the Labour Party for a better Nigeria and a better Anambra Central as well as for the good of the Church.

The Youths on their part thanked Umeh for his magnanimity and selfless commitments to the Church especially in support of the youths. They assured him of the youth’s unflinching support and solidarity for Obi’s presidential aspiration and for the Labour Party in the 2023 Elections.

Speaking through their Diocesan President, Comrade Chizoba Augustine Ubosi, they emphasized that Senator Victor Umeh’s exceptional participation in the 8th Senate and his consistent support for good governance, describing him as tenacious, compassionate and humble. They vowed that the Catholic Youths will rally round him to achieve a resounding victory at the polls on February 25, 2023.