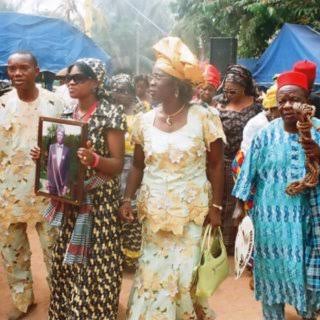 Some residents of Anambra and other South East States are not amused by the recent advisory from the proscribed Indigenous People of Biafra (IPOB) asking them to revert to the Igbo tradition of burying their dead within three days, ANAMBRA PEOPLE reports

The group, in a statement on Wednesday, had blamed some of the major problems facing the zone on the present practice of delayed and expensive burials.

According to IPOB, the vogue of keeping dead bodies in the mortuary for months and even years was having dire effects on Igbo land and largely responsible for the present moral decadence and other vices.

It said it would work out a strategy to deal with the situation, and this could include “the shutdown of so many mortuaries littered all over our land”.

However, the Anambra State Government and the State Police Command yesterday claimed ignorance of the IPOB threat.

Contacted, Governor Charles Soludo, who spoke through his Chief Press Secretary, Christian Aburime, said he was not aware of the development.

He directed enquiries to the state Police Command whose spokesman, Ikenga Tochukwu, also said he had no information to that effect.
Some residents of the state asked IPOB to focus on their mission and allow the people run their family affairs the way they want.

Residents of Abia State held a similar view with human rights lawyer, Barrister Emperor Ogbonna, and Mr. Jonathan Okoro advising IPOB to restrict itself to its agitation and avoid delving into sensitive issues capable of pitting it against the people.

Mr. Okoro said: “All this while that IPOB says it is championing the interest of the Igbo, we have been obeying its orders. But this recent order will not succeed.”

Ogbonna said: “They don’t have the right to tell anyone how they choose to bury their dead once the burial is not inconsistent with any law.

“There is no way that IPOB can tell or mandate people to bury their dead within three days. That order cannot work.

“The other time, IPOB issued an order saying that from a particular time, people should no longer eat cow meat in Igbo land. Today, are people not eating cows? Have people stopped bringing cows here?
“The truth about it is that you cannot control an Igbo man.

“The Igbo man is independent minded, because he will not allow anyone to decide for him how he wants to live his life.

“The issue of Biafra agitation is what the IPOB has been doing.

“Let them concentrate on whatever that they are doing. I don’t think that they should delve into the lifestyle of the people, including how to bury their dead.

“IPOB doesn’t run businesses for people. People use the money that they made through mortuary business to take care of their families, train their children and meet other family needs.

“So, telling somebody to close mortuary business because of whatever that you think about yourself is actually going too far.”

Spokesman of the Alaigbo Development Foundation (ADF), Hon. Abia Onyike, dismissed the IPOB statement as uncalled for.
He said: “There are more serious issues demanding our attention and action than burial issues.”

An official of the Enugu State Government, who preferred anonymity, told our correspondent that the order by IPOB for people to bury their dead in three days was unnecessary.

He said: “They should remember that mortuaries are more useful to the Igbo than any other ethnic group. This is because we are itinerant people. Our people are scattered all over the world and mortuaries help them to organise themselves and families before burials.

“We shouldn’t be wasting our time responding”
Emma Powerful, the IPOB spokesman who signed the group’s statement, had said: “Our ancestors were burying their dead ones within three days and that is our culture, and it helped our ancestors spiritually. Igbos have a very rich and spiritually-based culture which our ancestors maintained from the beginning of time.

“The present habit of keeping dead bodies more than three days and even months and years in the mortuary has had dire effects on our land and contributed to the spiritual weakness of the Igbo Nation and of the entire Biafraland, moral decadence and all manner of evil that have taken root in our land.
“Now that IPOB has come to realise that this alien practice of keeping the dead on land rather than committing it to mother earth has had a very negative impact on our people and upon our land. It has therefore become very imperative to urge our people to revert to the old practices that had very positive effects upon our well-being, both spiritually and otherwise.
“After some thorough investigation, we have come to the realisation that all the reasons given by our people, which caused the unnecessary delay in burying our dead within a short period, are neither cogent nor important enough.

“These reasons are all man-made, mostly monetary conditions from the bereaved families, traditional rites, churches and Umunna.

“Our people have turned burial into a carnival and asking families to pay levies or debt for their dead ones. This is an abomination and must be stopped forthwith.

“As it was in the past, bereaved families should be allowed to commit their dead ones to mother earth while a date for the burial ceremony is fixed for a later date as well as whatever levies that need to be collected.

“But using reasons of non-payment of burial levies to stockpile corpses in the mortuaries is what IPOB doesn’t want again in our territory.

“Our people should revert to our old healthy tradition of burying the dead and do the needful at specific times within their reach.

“IPOB will engage church leaders, town unions and traditional rulers and Umunna on this regard. We are advising them to prepare their minds on this clarion call because IPOB will develop a strategy of curtailing the excessive use of mortuary in our region.

“This strategy may include compelling the shutdown of so many mortuaries littered all over our land. The only dead bodies that can be allowed to stay longer in the mortuary are those in court or under police investigation.

“Igbos are shrinking in life because we dishonour the dead by keeping dead bodies in mortuaries for too long than necessary in these mortuaries. Any nation, tribe or family that keeps the dead without putting the corpse into the dust is causing a disservice to themselves.

“The Igboland has been turned into a gigantic mortuary where corpses are dumped with the accompanying dire consequences to our land, and this attitude and practice must stop forthwith.

“Owners of mortuaries in our land must start planning for another business. We are not against those engaged in the mortuary business but we are against keeping dead ones longer than necessary because we are planning to march and we cannot keep dead bodies unburied before we march.

“IPOB is encouraging our people on the need to accord respect to our departed beloved ones by burying them immediately, ” he said.