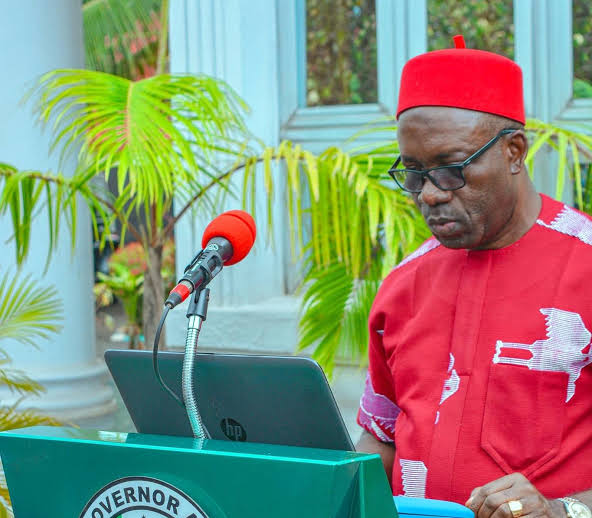 The Indigenous People of Biafra have urged Prof. Chukwuma Soludo, the governor of Anambra State, to put an end to what they have dubbed the “random” killings of innocent people by the security forces he formed in the state, ANAMBRA PEOPLE reports.

The group accused Soludo of creating a covert security organisation in the state while claiming ignorance regarding the loss of innocent lives in Anambra.
They made the accusations in a statement released on Friday by Emma Powerful, the organization’s media and publicity secretary.

Powerful accused Soludo of establishing Ebubeagu in Anambra in the name of a joint security outfit, comprising Nigeria Army and other security agencies, just like his counterpart in Imo State, Hope Uzodimma.

According to them, an example of such was the killing of one innocent youth at Abatete on the suspicion that he was an IPOB member.

The statement read, “The attention of IPOB has been drawn to the random killing of innocent people especially the youths of Anambra State by the Nigeria Army and the secret security outfit created by Prof. Charles Chukwuma Soludo of Anambra State.

“The unfortunate thing is that Soludo is claiming ignorance of the dirty job committed by these criminal security outfits, as innocent lives are being wasted in Anambra State.

“It is important that Soludo call those secret security outfits and their handlers and military commander to order because they have turned to kidnappers who kidnap innocent citizens in the name of arrest and turn around to request huge amounts from their victims before they are released and those unable to pay are wasted.
“Example of such killings was the reckless killing of one innocent youth at Abatete on the suspicion that he was an IPOB member by trigger happy terrorist soldier on this security outfit on the mere suspicion of being an IPOB member.
“IPOB is not a terrorist group even Nigeria court and recently UN Group has confirmed so. Only in Nigeria that being an IPOB member is meted with instant killing by the same government sponsoring more than four different terrorist groups in Northern Nigeria.

“Everybody in Anambra can see how these criminal security outfits are attacking and killing innocent people while blaming it on faceless criminals.
“These hoodlums called themselves Soludo security are Ebubeagu in disguise. Their modus operandi is the same with that of Ebubeagu in Imo State.

“Soludo call Nigeria military and your Ebubeagu security outfits who murder people at random to order. Otherwise, we will use our strategy to stop their madness and mindless attacks and killing of our people.
“Soludo, we advise you to be careful not to behave like Hope Uzodinma of Imo State who is using Ebubeagu to terrorise his people. We are aware that most of their heinous crimes in the state you are not aware. Their handlers have turned them into another criminal which will be hard to stop.”

But, while reacting in a telephone conversation with our correspondent on Friday, the Chief Press Secretary to Soludo, Mr Christian Aburime, denied that the state government has set up Ebubeagu, adding that the governor only strengthened vigilante groups to tackle criminalities in the state.

Aburime said, “It is not true that Soludo has created Ebubeagu in Anambra. I think what the IPOB are actually talking about is the Anambra State Vigilante Group, which has always been in existence but only been strengthened to go after the criminal elements terrorising Anambra people.

“The security agencies have never gone after innocent people. The governor has only strengthened and empowered the vigilante group to keep the peace, that is what is happening and they follow the laid down procedures. Their own is to go after the criminals and nothing more than that. They don’t go after the innocent people because that is not the reason they were created.”