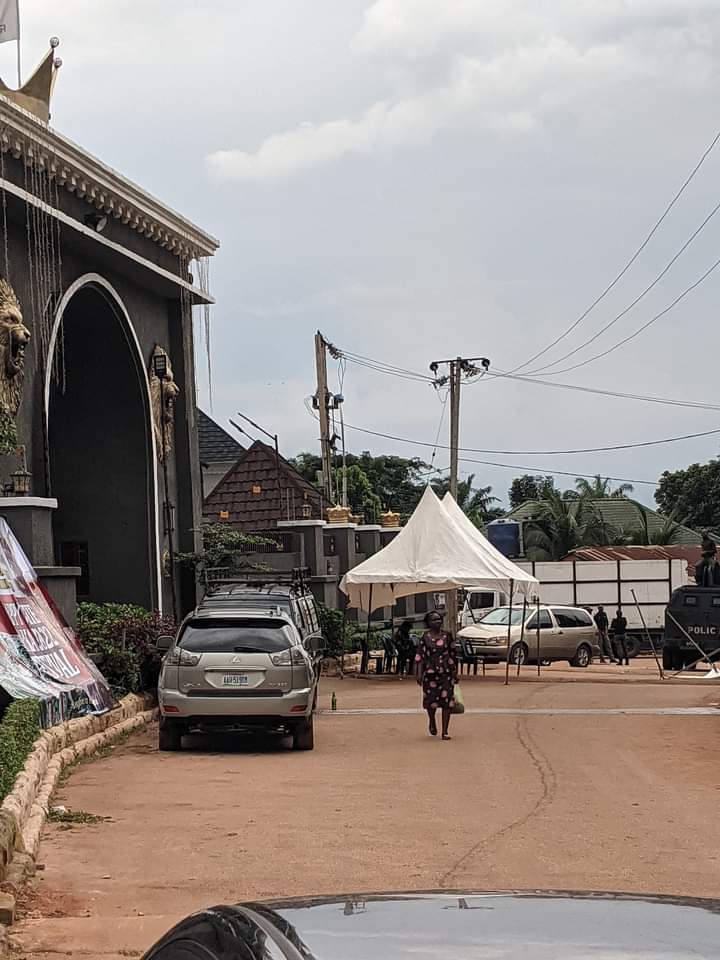 The monarch was reportedly preparing to celebrate the New Yam Festival in the Awka Kingdom on Saturday when police raided his palace and locked the premises.

Ndigwe had invited politicians, monarchs, journalists, and other prominent people from all around the country to attend the celebration.

Invitations sent out had read, “You are invited to the OTITE AWKA 2022 (Iri Ji Ofuu) festival of Awka Ancient Kingdom by the Obi of Awka Kingdom, His Imperial Majesty, Ozo Dr Austin Ndigwe. Date is Saturday 10th September 2022, by 11am, at the Palace of the monarch.”

According to sources, some notable monarchs from across the South-East and other parts of the country, were already at the palace at about 11am, when a huge detachment of police and military men arrived and sealed the palace, almost shutting in the invited monarchs, who were already seated.

“The policemen and military chased everyone out of the palace, shooting canisters of teargas at youths who had attended the event. There was pandemonium when they started shooting, and a lot of people ran away, while many youths sustained injuries,” the source said.

A policeman, who was not identified said they were acting on orders from above.

But the spokesperson for the Anambra State Police command, DSP Toochukwu Ikenga, when contacted, said he was not aware of any order to seal off the palace of the factional monarch.

The traditional stool of Awka Kingdom has been in a tussle over a few years now, after some influential members of the community claimed they have dethroned the monarch, Eze Uzu II, Igwe Gibson Nwosu.

Unconfirmed report, however, has it that a misunderstanding between Mr Arthur Eze and Igwe Austine Ndigwe was responsible for the sealing off of the palace.

But the state government, while reacting through the Commissioner for Information, Sir Paul Nwosu, insisted that the only recognised traditional ruler of Awka remains Igwe Obi Gibson Nwosu, Eze Uzu II, warning that Ndigwe should desist from parading himself as the monarch.

The commissioner also warned Ndigwe to stop usurping the rights reserved for the legitimate and duly recognised traditional ruler, which, among them is performing the New Yam Festival, adding that such acts would not be condoned by the state government.

He insisted that only Igwe Gibson Nwosu remains the only traditional ruler empowered by Section 15 of the Traditional Rulers Law of Anambra State 2007 to preside over such festivals or carry out any function of a traditional ruler.

The statement read, “It has come to the attention of the Anambra State Government that one Augustine Chukwuezube Ndigwe alias “Uzu Awka” is parading himself as the traditional ruler of Awka. Not only that, he has taking steps to perform one of the major harvest seasons traditional rites known as New Yam Festival or “Iwa Iji” of the Awka people, thereby threatening the peace and tranquility of the town. The state government will not tolerate this.