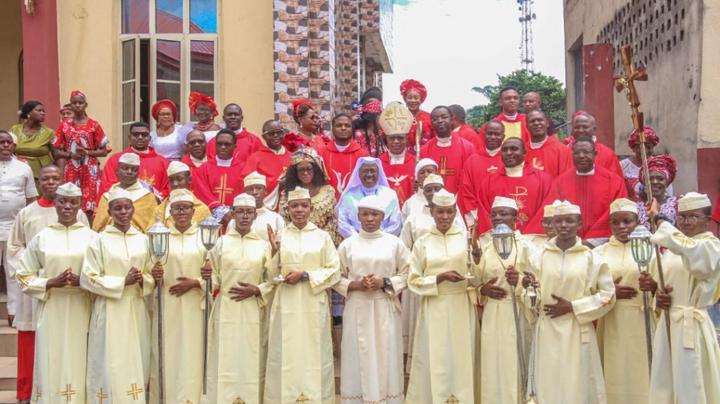 It was a fun fair as various sets of Queen of the Rosary College Onitsha Alumni gathered to celebrate Eighty years anniversary of the school.

The event held within the school premises attracted Old Girls of the school from within and outside the country and the Commissioner for Education Anambra State Mrs Ngozi Chuma-Udeh who commissioned the staff quarters built by the Old Girls.

Queen of the Rosary College was founded on the 7th of October, 1942, during the time, the school was a citadel of moral and academic excellence.

Eighty years after, the school is still waxing strong in academic excellence and have produced great manpower in Education, Politics, Religion, Business, Technology and more.

In his homily to mark the event and the feast of Our Lady of the Rosary on which the school was founded, the Archbishop of Onitsha Diocese, Most Reverend Valerian Okeke who spoke on Excellence said for one to excel in life, one must dedicate enough time to planning, have a good mentor, be vision driven, imbibe the culture of discipline, be consistent and back up his or her plans with prayer.

Archbishop Okeke who is also the proprietor of the school charged the students to key into the Archdiocesan culture which is Excellence in behavior, character and academics.

Speaking to news men, the Principal QRC Onitsha, Sister Maria Nwankwo, appreciated the alumni for their contributions to the success story of the school and harped on the need to promote girl child education.

In separate interviews, the Chairman on the occasion, Mrs Caroline Ufere, the Global President QRC Alumni, Mrs Ngozi Okose and the Global Secretary, Mrs Chizo Malize said the school witnessed an infrastructural decline during the civil war but with the QRC global forum, they stepped in, in 2011, did lots of projects to revive the school, pointing out that they are determined to return the school to its former glory as the best all girls boarding school in West Africa.

The students were not left out in the excitement as the Senior Prefect, Adaugo Ebeleke and the Deputy Senior Prefect Chidinma Okoye, said they are proud to see the caliber of women the school has produced and appreciated the Alumni for spending time with them.

The event featured administering of Holy Sacrament, Confirmation, cutting of cake, March Past, Cultural display while the guests were entertained with music and sumptuous delicacy.