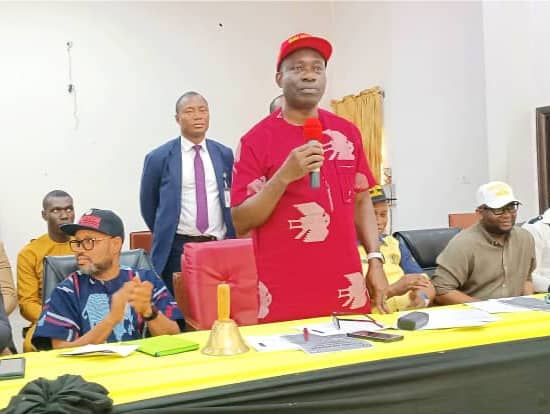 “According to the Governor, this is a new dawn in the state and an era of transparency”.

“We are applying the principle of unparalleled and incomparable transparency. You must understand where we are and why the old system has to change.”

“We are closing the existing revenue windows and running a transparent revenue door, for people to give the Government what is due to them so that if you win or lose a bid, you will understand why,” the Governor said.

Governor Soludo assured that those who were recently awarded revenue concessions will be duly refunded.

“We want to have a system in Anambra where you do not need to know anybody (Governor, Commissioner or a Principal Officer), to have a concession. If you win a public bid, you take it,” he stated.

“We are interested in the maximum revenue this public bid shall drive for the state. We recruited 5000 teachers, doctors and must pay them. We toured all the bad roads in Awka and Nnewi yesterday and need funds to build all of them.

“All the roads I flagged off have commenced construction already. We shall still flag off more roads. Literally, every Local Government in the state will experience massive construction,” Soludo said.

“Most of the revenue generated in the past ended up in private pockets. Some pensioners have not been paid their gratuities since 2018, in accumulated debts running into billions of Naira. We shall pay these pensioners and offset these debts. Everyone that retired during my administration are being paid as well”.

In his closing remarks, Governor Soludo admitted that the public bid through the auction have made him know the true value of the concessions.

“We are assuring Ndi Anambra that they shall see the value of every Naira we spend. We must give value to our people and assure transparency in our public finances.”

“The benefit of an increased revenue is for the poor masses and future of Anambra state. The target is to generate an extra N10 Billion Monthly for the state,” Soludo concluded.