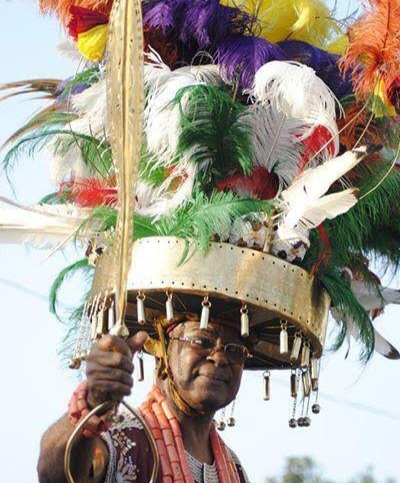 The Obi of Onitsha, Igwe Alfred Achebe, said that his ascension to the throne some 20 years ago was to fast-forward an ancient traditional society to the 21st century, ANAMBRA PEOPLE reports.

Achebe, who is the Chairman of Anambra Traditional Council, said this in his address at the 2022 Onitsha Ofala Festival at the Ime-Obi palace on Saturday.
The traditional ruler, who was crowned on May 14, 2002, also used the occasion to celebrate his 20th anniversary on the throne.

Achebe described his reign as a journey of leadership change, noting that every society should anticipate and be at pace with change or be overtaken by it.
He said upon rising to the throne, he defined a personal ruling philosophy premised on peace and reconciliation, based on truth and transparency as a foundation for sustainable development.

According to him, drawing from this philosophy,  “we have shaped a vision of re-inventing and re-positioning the Onicha Ado N’Idu kingdom”.
‘’We have applied modern management and leadership principles to traditional governance and the progressive evolution of the culture of our people,” he said.

The 81 years old traditional ruler said reinvention and repositioning strategy had helped to rebuild trust amongst the people, resolved disputes within and between kindreds, families and villages.
He said his rulership had redeveloped the palace as a symbol of change, redefinition of the community, promotion of self pride and the spirit of ‘Onichaness’.

He said under his reign, the Ofala festival had received endorsement by the Nigerian Tourism Development Corporation as a major Nigerian festival.

This, he said, had boosted plans of bringing the world to Onitsha to experience the rich cultural heritage, and enhance the growth and development of the community.

‘’I ascended the throne of Ezechima, the founding father of Onicha Ado N’Idu, 20 years ago on May 14, 2002, which coincidentally was also my 61st birthday.

‘’Thus, I have chosen to formally mark this milestone anniversary with the 2022 Ofala festival as the pedestal for thanksgiving and celebration. This milestone provides an opportunity for some reflection.

Achebe thanked Globacom and International Breweries, main sponsors of the festival, saying their relationship over the years with the organisations had contributed in no small measure to the growth and development of the Ofala.

He further thanked other donors and supporters, including NTDC, the Anambra Government, especially for the promise to ensure renewal of Onitsha Urban City through construction of roads and other infrastructure.

“Our visitors have come from far and near, within and outside the country, to felicitate with us, notwithstanding the travel challenges of the post COVID-19 era.

‘’We do not take your friendship for granted and look forward to opportunities to reciprocate your kind gesture. We pray for God’s protection as you journey back to your destinations.

‘’Our appreciation also goes to the various security agencies in the state who have collaborated tirelessly and effectively to ensure a hitch-free celebration,” he said.