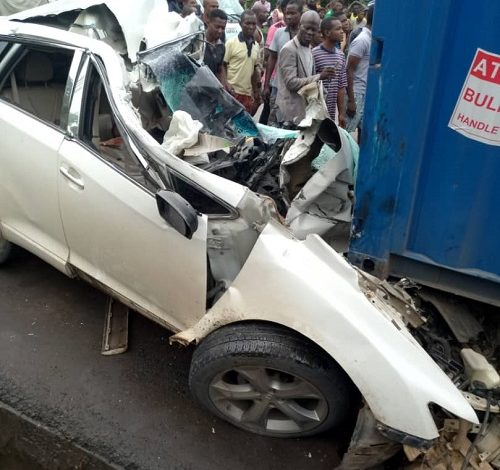 No fewer than two persons have lost their lives in a ghastly accident which occurred at Summer-Hill section of Nkpor-Umuoji Road, in Idemili North Local Government Area of Anambra State, ANAMBRA PEOPLE reports.

According to eyewitness account, the driver of the Lexus car lost control and rammed into a tricycle that was discharging its passengers, killing two young men on the spot.

A road user on the Nkpor-Nnobi-Ekwulobia route, Mrs Joseph Okoye attributed the accident to recklessness on the part of the driver of the private car.

“I ply this route on a daily basis. It is unfortunate that some people will press-down the throttle forgetting that the road is in terrible condition. Everybody has the right of way and I can assure you that this unfortunate accident could have been avoided if the driver employed more care. Two souls have been lost to this accident which occurred within the town here. It wasn’t on the highway. It is disheartening,’ he lamented.

On his part, another road user, Uche Maduka said it is high time people avoided being in much haste while on travel and as well keep to good timing.

“The Lexus SUV driver was very much in haste, speeding faster than he can cope with in an emergency situation. The lives of these young men have been wasted. They were probably close to their destinations after a long day, only to end it in the most painful manner. May their souls rest in peace,” Maduka prayed.

He noted that the driver of the Lexus SUV, did not see the Keke on time, hence, it was too late for the accident to be averted.

As at the time of filing this report, identities of victims of the accident are yet to be ascertained, while corpses of those who lost their lives have been deposited at an undisclosed morgue.