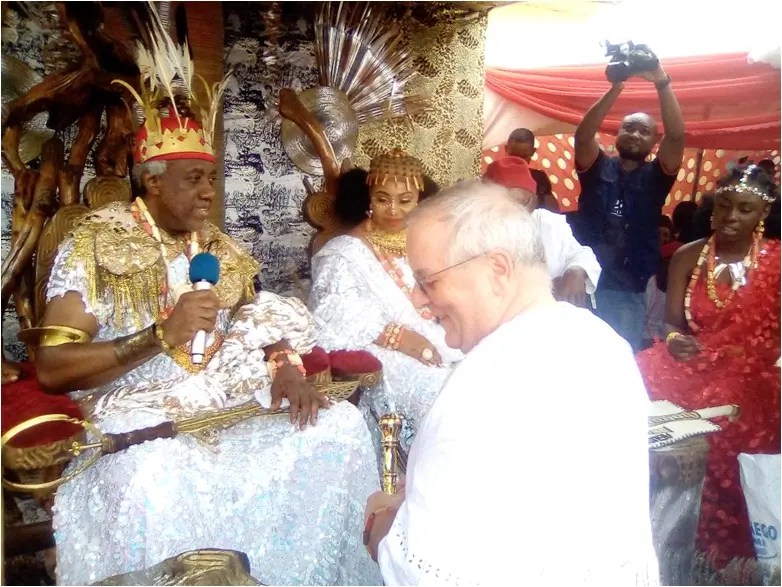 Igwe Chidubem Iweka of Obosi Ukwala kingdom, Idemili North Local Government Area, Anambra State has bestowed the title ‘Agusimba’ on the Project Manager of Second Niger Bridge, Fredrick Wieser based on pure merit as someone who was used to actualise the so much politicized second Niger Bridge, ANAMBRA PEOPLE reports. The monarch equally used the occasion to read riot act to criminals, cultists and fraudsters operating in the area, warning them about the consequences of their nefarious activities.

In his speech during his 11th Obiora/New Yam Festival, he said that the community has established adequate synergy between the police, anti-cult, Anambra Vigilante Services (AVS) and Obosi youths to achieve quite a formidable crime-fighting force.

Eze Iweka, who insisted that it would no longer be business as usual for criminals in the area, further disclosed that the community had equally established’ Movement Against Cultism in Obosi'( MACOB), as part of its new anti-cult agenda.

Flanked by his cabinet chiefs, including the Project Manager of Second Niger Bridge project, Mr. Frederick Wieser, whom he gave a chieftaincy title of Agusimba of Obosi Kingdom during the festival, Eze Iweka commended every group that has been instrumental in fighting criminality in Obosi community.

“I commend the Police DPO and Obosi Anti- cult Commander, the President- General of Obosi Development Union, Chief Ikechukwu Okolo, President of Obosi Urban Landlords, Chief Emeka Asimoye (Dikedioramma), the Scorpion Vigilante and our youths for their concerted efforts in fighting criminality in Obosi to a virtual standstill”.