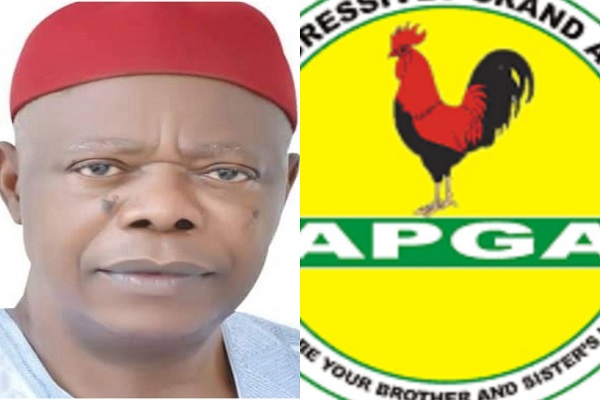 The presidential candidate of All Progressive Grand Alliance (APGA) and former Chief Judge of Anambra state, Prof. Peter Umeadi may be in a serious problem as he is reported to be lacking funds to prosecute his presidential campaign, ANAMBRA PEOPLE reports.

According to a reliable source in APGA, the presidential candidate has continued to lament to party stakeholders and prominent Anambrarians on how the governor of Anambra state, Prof. Chukwuma Soludo who is supposed to be the major financier of the party has not been forthcoming despite several entreaties, noting that it has starved his campaign council of fund.

The source stated that the presidential candidate equally lamented the absence of strong financial party stalwarts in APGA as in other major political parties like PDP, APC and even Labour Party. He further noted that as it is customary in other parties, the governor of Anambra state who is supposed to be the financial backbone of the party as the party’s only sitting governor should be in the forefront of fundraising for the presidential campaign, but has continued to complain of paucity of funds, leaving him and other APGA candidates in several states in difficulty as election approaches. This, he said, has left the former Chief Judge, a retiree in dire financial fix, making him to literally dip his hands in his personal funds to finance some of the campaign expenses.

Another close ally of the former chief judge confirmed the story and stated that this has been the reason why their campaign has not generated enough momentum. “As you can see, we do not have a strong media presence, no funds to setup campaign offices across states of the federation and we don’t have money to fund the cost of logistics as we commence campaign”. He lamented.

The ally further lamented that Brigadier Gen. Gbor who was the party’s presidential candidate in 2019 presidential election even though not from Anambra state was given maximum support by ex-governor Obiano and noted that the former governor even bought him SUVs befitting of a presidential candidate. According to him, this is not the same with Prof. Umeadi who is from the state as the governor but has not received the kind of support Gen. Gbor enjoyed. He decried the way the presidential candidate was allowed to be traversing the length and breadth of this country using his personal cars with the attendant wear and tears and pleaded with the party to prevail on the governor to do the needful otherwise APGA’s outing during this presidential election will be a show of shame.

Both sources argued that APGA could perform better than their last outing in 2019 presidential election where they clinched 5th position, saying a good performance at this 2023 election would be a plus for the current leadership of the party and position it well for victory in other elections.