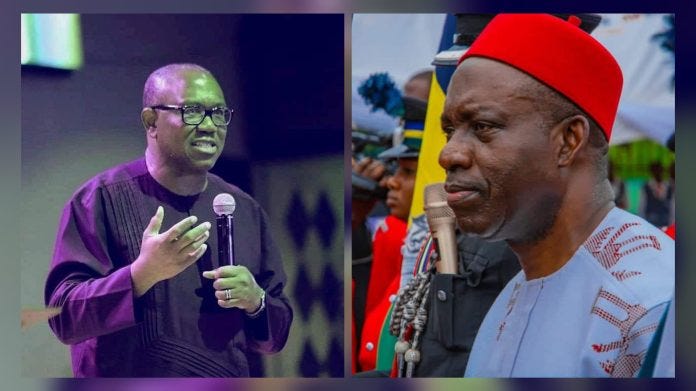 The winner of Nigeria’s 2023 presidential contest is still very much open to conjecture, but there’s no question about one outcome. Whatever happens, Governor Charles Chukwuma Soludo of Anambra State will be remembered as an inescapable actor in the electoral drama.

The question is, will Nigerians and pundits come to view the governor as a prophet, a sourpuss – or both?

Last week, Soludo launched two salvoes to earn himself attention and irritation in, it seemed, equal measure. Appearing on Channels TV to discuss his proposed budget, he was asked about the investments that former Governor Peter Obi had made prior to leaving office in 2014.

Obi, who is auditioning for the job of Nigeria’s president, has often bragged about his husbandry of state funds during his eight-year tenure as governor. At first, Soludo demurred, telling the Channels TV anchor that he intended to focus solely on his budget.

Even so, he allowed himself to take the bait. In what seemed like a sly comment, he disclosed that Obi’s much-discussed investment was, essentially, peanuts.

In any other season, Soludo’s unflattering assessment of his predecessor’s economic management might have gone unremarked. But this is no ordinary season. Nigerians are bracing for what may be the most consequential presidential elections in the country’s history.

To say that the stakes are high is to voice a felonious understatement. Nigeria has never been more comatose, has never more resembled a failed state. For some, what happens early next year may well determine whether there will remain a coherent space called Nigeria.

Many Nigerians – especially the youth – have cast the forthcoming elections as a make-or-break. Over the years, many of these young people had heard politicians declare them the leaders of tomorrow. They had waited in vain for that tomorrow to arrive. Finally, their lives bare, their patience as thin as their future was bleak, they decided to wait no longer.

Obi, who is sixty-one, is hardly an exemplar of youthfulness. Yet, juxtaposed with the two ostensible frontrunners – former Vice President Atiku Abubakar of the Peoples’ Democratic Party (PDP) and former Governor Ahmed Bola Tinubu of the All Progressives Congress (APC) – his edge in physical conditioning and mental alertness is undisputed.

It’s no mystery that he’s attracted a burgeoning fanbase of youth who call themselves obidients. If you ask them, the choices in the presidential elections are stark. It’s their man Obi, on the one hand, and the other candidates, on the other hand.

For them, then, when all’s said and done about the election, there may or may not be a country – depending on whether their candidate wins or loses.

Soludo knew – he must have known – that the substance of his disclosure in that television interview was bound to have a devastating effect. Obi’s opponents were quick to make hay out of it. It was proof, they warned, that the Labour Party presidential candidate was less a competent leader than an agile inflater of every small achievement.

Thanks to his zealous youth supporters, Obi has the most intimidating social media operations of anybody who has ever run for election in Nigeria. These fanatics went for Soludo’s scalp. They accused him of being a fifth columnist, a diabolical schemer, a man so addled by envy that he drew a dagger behind Obi’s back.

I am as close to a free speech absolutist as you’re likely to find anywhere. If I were Soludo, I would have stuck to my position that I would only discuss my budget. But he made a different choice, and we must grant him the right. I’m no prospector of motives, so I cannot confidently pronounce that the governor’s motive was malign or his intent sinister.

When I stated that Soludo should have stayed away from discussing Obi, I don’t mean to suggest that the LP candidate should be spared criticism. No, I believe in subjecting any would-be leader to scrutiny. If Obi left more modest savings in Anambra than he had let on, he deserves to be exposed.

However, in Soludo’s place, I would have asked for a different interview session. Then I would have all the time to weigh in on Obi and the other presidential candidates.

I’m willing to hazard that the governor was not caught unawares by a wily TV anchor. He did not have a slip of tongue. He was conscious of the game, and he fully intended to play it.

In that event, he must either be a man of uncommon bravery, or politically naïve and foolish. If brave, then he could not have been taken by surprise by the blitzkriegs from the camp of obidients.

Obi is both lucky and unlucky in his youth supporters. They bring passion to his defense. They use every available forum to proselytize on his behalf. They’re striking fear in the hearts of some geriatric politicians.

Sadly, they also bring inelegant exuberance where restraint and caution are called for. They leave the impression that Obi is a model of perfection, that he’s possessed of much superior to papal infallibility.

In this instance, their rabid vituperations against Soludo backfired. In a defiant, lengthy, often rambling response, the governor all but bet that Obi’s presidential aspiration was a pipe dream. He even accused the LP presidential hopeful of doing deliberate harm to the interests of the Igbo.

I think much of Soludo’s prognostication was hokum. By some conventional calculus, yes, Obi’s path to the presidency is not promising. But it’d be foolish to altogether dismiss the energy that Nigeria’s youth have lent to Obi’s campaign. There are, I suggest, enough variables at play to confound past trends.

At any rate, here’s my prediction of a likely fallout from all the brouhaha. If Obi wins the presidential race, Soludo should abandon all hope of a political career. Should Obi lose, Soludo would have earned the mantle of prophet.

Yet, Obi’s supporters, whether Igbo or not, will forever tag him a scoundrel. He can count on being scorned, going forward, for being the nemesis of a man whose rhetoric inspired great, and often exaggerated, expectations in many a young Nigerian’s heart.