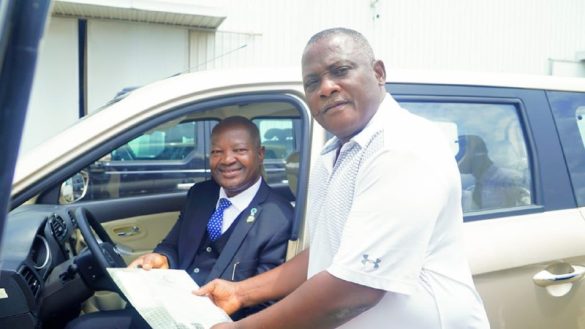 This comes as the fulfillment of a promise made during a working visit to Innoson Vehicles by top hierarchy of the Sierra Leone Defence Ministry led by Mr Edward Soloku, the Minister of Internal Affairs as well as Sierra Leone Road Transport Corporation (SLRTC) led by its President Mr. Isaac Ken-Green.

The Government of Sierra Leone led by President Julius Maada Bio placed an order for the manufacturing of Innoson Vehicles valued at $4.7Million for the officers of Republic of Sierra Leone Armed Forces (RSLAF).

The first set of these vehicles has been supplied from Nigeria to Sierra Leone and was discharged at Queen Elizabeth 2 Port (Sierra Leone’s sea Port “Water Quay”) in Free Town for distribution to military officers across the country. In one of the many reports in the local media on purchase of the made-in-Nigeria vehicles, a popular blog in Sierra Leone, Focus News Blog, hailed President Bio for believing “that our Army Officers deserve better.”

The post, which showed a line-up of the IVM products from Nigeria, informed Sierra Leoneans that the vehicles would soon be “ready for distribution to military officers across the country” by the government. This development is indeed a step towards the acceleration of intra-African trade as facilitated by the implementation of the African Continental Free Trade Area (AfCTA).