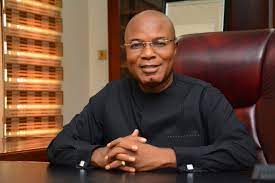 It was a dual event as there was also a thanksgiving service to thank God for his wife, Lady Ada Chukwudozie, who turned 50. Ada is the current Chairman of Manufacturers Association of Nigeria (MAN), South East Region.

The school whose students and pupils got scholarships was named after the matriarch of the Chukwudozie family. The son is said to have also supported the school with ultramodern structures. A statement from Chukwudozie’s media office issued by Chinedu Nsofor indicated that the industrialist also gave cash gifts of N1 million to each of the choristers that participated in the church service. The industrialist appreciated God for the life of his beloved mother Lady Chukwudozie, saying that she laid a solid Christian foundation for them.

He recalled how his beloved late mother led them to God quite very early in life and was very devoted to God as a sanctuary cleaner. He specifically recalled how his mother cleaned the toilet facilities of St. James Anglican Church, Awada.

For that reason, he said that he would commence the construction of a multi million naira ultramodern toilet facility at All Saints Cathedral to be named after his late mother.