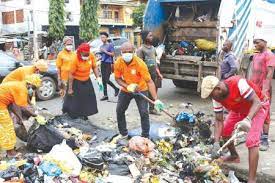 “Starting from May, parks and markets not participating in the monthly sanitation exercise would be shut down”, he said.

Odimegwu urged both commercial premises and residents to comply with the sanitation order, adding that it would not be business as usual as any defaulter would be charged legally. He said the ministry is ready to inject force into the exercise as a way to achieve cleaner and healthier Anambra State.

“Our environment is under threat as a result of unfriendly attitude of some residents; vigorous transformation is expected to restore a cleaner Anambra Environment.

“We will call for community participation approach, six hours refuse collection, stronger partnership of refuse collectors for sustainability and waste to wealth approach among other steps,” he said.

Odimegwu appealed to the people to shun indiscriminate dumping of refuse. The commissioner said the government has plans to build healthy environment, adding, it is committed to ensuring that every building had more than one tree in it.

ANAMBRA PEOPLE gathered that people apprehended during the exercise by the commissioner’s monitoring sanitation team will be forced to take part in the next exercise.