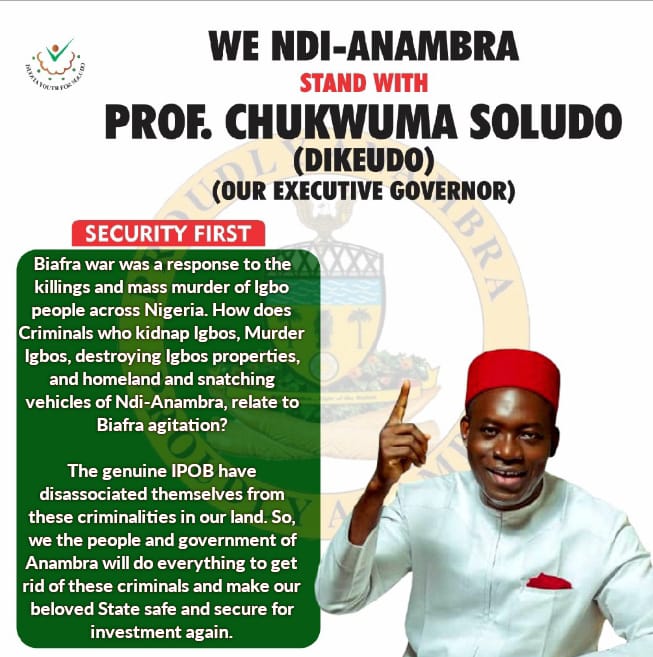 The continous seige by criminal elements masquerading as agitators who the Indigenous People of Biafra (IPOB) has condemned and disassociated itself from, can no longer be allowed to continue in it mindless atrocities against Ndi Anambra.

Prof Chukwuma Charles Soludo, Anambra State Governor has repeatedly said over and again that these criminal elements must put an end to these heinous atrocities.

He has gone further to offer amnesty to these groups to renounce their deadly atrocities with a promise to rehabilitate them as well as assist them to get engaged in a more meaningful new life. He also assured that those who refused to embrace this olive branch will henceforth be treated as criminals.

On the basis of these and more so, that IPOB has also condemned the activities of these criminals, Ndi Anambra youths and indeed everyone in Anambra are all in agreement with Governor Soludo on the need to take back our beloved homeland from these hoodlums and criminal elements, killing and maiming our people.

Reports are now emerging of how the youths of Ichi, in the Ekwusigo Local Government Area of Anambra State, have destroyed a suspected kidnappers’ hideout in the community.

The group, who stormed the camp on Sunday, also set ablaze a shrine in the area.

A source said the youths took the decision to stop the activities of criminal elements in the community who have been killing, maiming and destroying the economic life of the people.

The source said, “The youth seized some criminal elements in the Ichi community. These hoodlums are behind the killings and abductions of residents. The angry youths also set their shrine ablaze on Monday.”

A video circulating on social media showed the moment the group swooped on the camp on Sunday and arrested some members of the gang, who had been allegedly operating in the area and nearby towns of Oba and Ojoto.

The action of the gallant youths have received wide commendations especially on social media platforms. The generality of Ndi Anambra have already thrown their full weight behind Governor Soludo on his genuine efforts to rid Anambra State of all criminal elements masquerading as agitators.