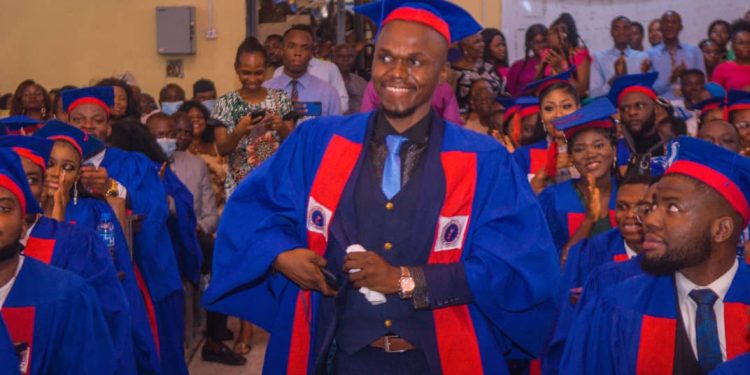 31-Year old medical doctor, Oluebube Okoye stunned everyone recently when he confessed that he had to hide his identity as a medical doctor for three years while in school in order to pursue his passion of reading Pharmacy and becoming a Pharmacist.

Okoye emerged the 2020/2021 overall best graduating student from the Faculty of Pharmaceutical Sciences, Nnamdi Azikiwe University, Awka with a CGPA of 4.87

He was the cynosure of all eyes amongst 118 graduands at the oath taking/induction ceremony organized by the institution in collaboration with the Pharmacists’ Council of Nigeria (PCN) which held at the JUHEL auditorium, Agulu campus of the University recently.

Dr. Okoye, who hails from Ekwulobia town in Aguata Local Government Area of Anambra state, had graduated from the Medical school, College of Health Sciences, Okofia, Nnewi campus of Nnamdi Azikiwe University in 2014, but unlike many who would be fulfilled having attained such envious professional height, he went on to obtain a Direct Entry form to study Pharmacy.

In a chat with this reporter, he revealed that his success in life stems from his resilience and resolve to distinguish himself among his contemporaries. According to him, “The drive was as a result of a need to distinguish myself, to be unique, carve a niche for myself, go through unfamiliar terrain. I just love excellence. It took a lot of discipline, a focused mind, and sheer commitment to achieving goals I set for myself.

“I call myself a product of grace and mercy because it wasn’t easy. I had a very tight schedule while in school. Sleep was a scarce commodity as there were times I’d read for 17 hours in a day. I tell myself that I have no reason for not being the best that I could, irrespective of the fact that I was very busy combining part time job as a medical doctor with academic activities. However, I didn’t see my tight schedules as an excuse for not excelling”, he averred.

On why he decided to read Pharmacy after studying such a prestigious course as Medicine, Okoye revealed that while in medical school, he had always had a likeness for drugs. “I had interest in drugs, I loved Pharmacology while in school. I was fulfilled as a medical doctor, and I am proud to be a doctor in addition to being a Pharmacist”, he noted.

For Okoye, the journey was never rosy as he was faced with lots of disappointments from result to self-doubt. In his words, “There were lots of discouragement from seeing results that were not my expectations. At some point the journey became so tough especially as most of my course mates back in medical school travelled out and were doing astonishingly well, I was questioning my decision in pursuing another degree in Pharmacy.

“Also, I hid my identity as a Medical Doctor within the first 2-3 years of study because of the mindset I had about the cold inter-professional rivalry existing between the medics – doctors, pharmacists, med lab scientists; I was scared of being victimized. But surprisingly when my colleagues and lecturers found out, I got a lot of encouragement, acceptance, respect and honour from them”, Okoye further revealed.

In his valedictory speech, Dr. Okoye expressed appreciation to his family for being supportive especially his elder brother, Chibuike Okoye, whom according to him, is his benefactor. “I had support from family, my elder brother was always there for me, he is my benefactor.

Apart from family’s support, I was doing part time jobs while school was in session and I do full time jobs during holidays”, he said.

He further expressed gratitude to the University and her authorities for the wonderful platform and opportunity to excel and hopes to make Unizik and Nigeria proud on the International stage if presented with the opportunity through scholarship awards.

Okoye urged students to work hard and be disciplined in their academic pursuit. In his words, “I encourage students in all sphere to work hard, be disciplined, set a goal for oneself and believe in God and remain focused. I don’t see myself to be super intelligent rather I see myself as being able to mix hard work, dedication, discipline and being focused. I pursue each goal with vigour. I understand the mad rush to make money among youths today but I encourage every young person to make out time to build a solid foundation for yourself for the future. When you get yourself on the right pedestal, the money will come”, he advised.