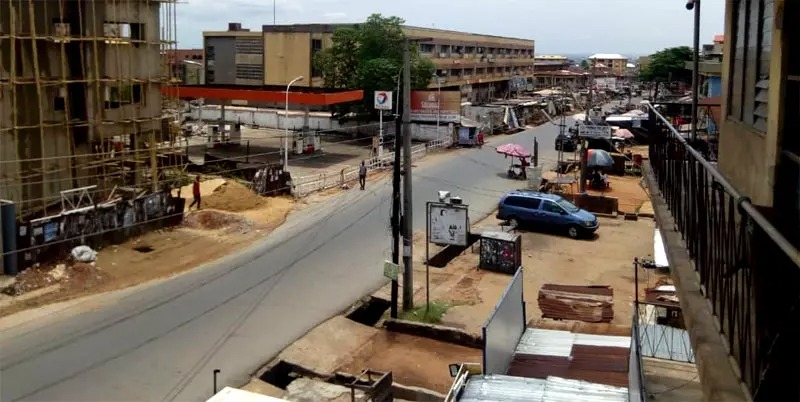 The Monday weekly sit-at-home, which had been cancelled by the Indigenous People of Biafra, IPOB, and reinforced by Governor Chukwuma Soludo’s directive, but still being enforced by unknown elements, manifested in its highest form on Monday, April 4, as residents deserted the roads and streets of Onitsha, the commercial hub of Anambra State.

It was also the same in Nnewi and its environs, as heavy vehicular and human traffic witnessed some few weeks ago on the roads and streets of the town and that of Onitsha, disappeared. According to some residents of both Onitsha the commercial city and Nnewi the industrial town of Anambra State, the current worsening disappearance of vehicular and human movements on the streets and roads is not unconnected with the directive by the state government that there is no more sit-at-home and ordering the civil servants to resume work, an order the civil servants ignored.

GOVERNOR SHOULD HAVE STUDIED SITUATION PROPERLY
Others including an Nnewi-based legal practitioner Mr. Okechukwu Anele, alleged that the worsening disappearance of vehicular and human movement in the state, not only in Nnewi and Onitsha, is the result of misguided statements from the state government.

He said the government did not first study the situation of the sit-at-home that is being forcefully obeyed since the second week of August 2021, when it was suspended by IPOB, which originally issued it.

Anele also alleged that people are very afraid to hit the roads with their vehicle, while those on foot are equally afraid of what will be the reaction of those implementing the sit-at-home.

They said they do not want be victims of stray bullets from the hoodlums, who have been enforcing the IPOB suspended sit-at-home.

According Anele, “You are a journalist and I am sure you have been monitoring the sit-at-home since its inception in August last year.

“I want you to be honest in answering this question.

“Was the sit-at-home not relaxing one month ago before the present administration came into power?

“Were people, especially street traders and roads and street shop owners including private office owner like us, not operating, even though markets and banks were not opened? “How come this administration came in and the relaxing situation of sit-at-home went back to a state where all the streets and roads businesses disappeared again?

“It is the careless statements coming from the government that is the cause of the current situation.”

ONITSHA
In Onitsha the commercial city of Anambra State, roads and street shops that used to operate last three weeks, were all under lock and key.

Heavy vehicular movement, which gladdened the hearts of residents that things were beginning to normalize suddenly, disappeared as residents say they do not want to take any risk.

They recalled what recently happened in Nnewi South Local Government last week, where houses in the council headquarters were set ablaze and three police stations burnt.

‘WE ARE SCARED’
A surveyor Mr Cletus Ofoma and an engineer Mr Ikechukwu Okafor, attributed the current situation to fear, which resulted from what the reaction of the hoodlums enforcing the Monday weekly sit-at-home would be, which the government is countering with its directives to civil servants and churches.

According to Ofoma, “It will be recalled that the state government, last weekend, ordered churches to conduct church services today (Monday) to counter the ongoing Monday weekly sit-at-home.

“Did anybody or any church open today for such service? The answer is no, because nobody want to take a risk.

“Even the church leaders do not want to incur the wrath of the hoodlums and they will equally not be able to give good reasons for conducting another church service on Monday if anything happens to the faithful.

“So what government is expected to do is to save governance and allow sit-at-home to relax naturally as it was doing before this government came in.

“They should not aggravate it with statements and orders that are not being obeyed, which makes the government not look serious.”

‘NNAMDI KANU IS THE KEY TO PEACE’
Okafor, on his part, said that hoodlums are not afraid to waste life and do not stand to lose anything about any life they waste, especially when they feel challenged by the government.

He said: “The houses in the local government headquarters and the Police stations they burnt in the council area, did they lose anything, or was any arrest made?

“These are what the people take into consideration before they come out on the roads, since government started making statements that look like they are in contest with the unknown gunmen and hoodlum’s enforcing the sit-at-home.

“So government should be cautious with their statements, directives and orders for peace to reign.

“If they are serious they should facilitate their efforts, if any, for the release of Nnamdi Kanu and once that is done peace will return.

“South-East, Igbo, are not violent people and they do not believe in destroying themselves, they feel humiliated — that is the problem.

“You went outside the country, kidnap somebody and kept him in DSS custody without seriously attending to the charges you preferred against him and you want peace to reign?

“Igbo governors should simply do the needful for peace to return in South-East.”

1 thought on “SIT-AT-HOME: WHY RESIDENTS DESERTED STREETS OF ONITSHA, NNEWI DESPITE SOLUDO’S DIRECTIVE”