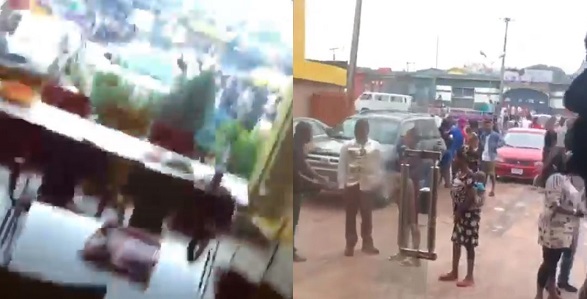 Information gathered that the gunmen came into Sophia Fast Food, but failed to harm the fun-seekers, who were obviously enjoying themselves for the Easter celebration.

A source said they simply dispossessed all customers and staff of the eatery of their phones and left the area without any challenge, despite an armoured car and security personnel positioned in the area.

A Facebook user, Iyke Orji said: “Nobody was killed, nobody was shot.

They came to Sophia Fast Foods Oko, yes, a fast food. They collected all the phones of people eating there. They now set fire in the frontage of the fast food joint.

“Sophia fast foods just opened a new branch in Ekwulobia and people are thinking if it was a calculated attempt by competitors,” Orji said.

Attempt to get confirmation from the Police Public Relations Officer of Anambra State Police Command, DSP Toochukwu Ikenga failed as his phone was not reachable at the moment.