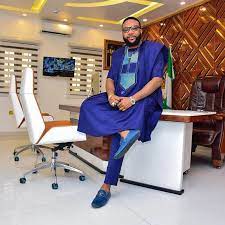 Born, Emeka Okonkwo in Ajegunle, Lagos, Nigeria, on February 18, 1981, E-Money got his nickname after he started throwing money around and demonstrating what a luxurious lifestyle. He is not just a socialite but one who over the years has become famous on social media. Some other people even refer to him as Arab money.

He is from Amaputu in Uli in Ihiala local government area in Anambra State Nigeria.

He is the younger brother of the Limpopo crooner, Kcee, and also the official sponsor of his music career plus that of Harrysong and Skiibii.

Marriage: E-Money is married. He has three sons with his wife, Juliet, whom he’s been married to for about eight years now.

Speaking of his turning point, E-Money recalls coming back to Lagos after their traditional marriage and receiving a call that changed his life forever. “We were on our way to Lagos when I received a phone call informing me that I had been awarded a 20 billion naira contract and that is how our lives changed forever”, he said.

His worth is estimated at $55 million, from entertainment, both his oil and gas business, shipment and delivery, record label and Hotels.

It is widely believed that, E-money and Jowi zaza is the lead investor to Cubana Group of companies Foundered by Obi Cubana.

Kingsley Chinweike Okonkwo , better known as Kcee is a Nigerian singer songwriterand the elder brother to E-money . He was formerly in the Hip Hop duo group called Kc Presh.

Emeka Okonkwo who is famously known as E-money is an entrepreneur, investor, business tycoon, and the chief executive officer (CEO) of Five Star Music. He is into Oil and Gas and Emmy Cargoes Nigeria Limited formerly called Borisa Nigeria Limited (a shipping company).

1 thought on “E-Money: Biography, Net Worth, Wife, Children, and Source of Income”