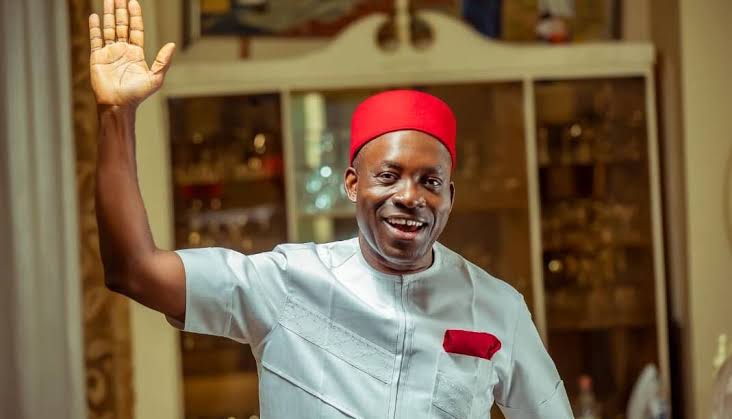 It was the Chinua Achebe, the master story teller that said that morning shows the day. A male chick is known from infancy. 100 days is not enough to determine the success of an administration, especially one that is fraught with enormous challenges inherited from the previous administration, but it can help project the trajectory of actions and whether those actions are in line with the campaign promises restoring the glory of the State.
Considering where he met the State, soludo has shown leadership in some critical areas of governance and the results of some of his effort will start paying off soonest. For ANAMBRA PEOPLE, these are some of his achievements so far in these last 100 days as a Governor.

The primary aim of every government is protection of lives and property. It is upon this aim that every other developmental stride can be achieved. Soludo’s government started on a very difficult note with about 4 local governments in Anambra under the control of unknown Gunmen and kidnappers . Normalcy is returning to the State today as the usual shootings the state experienced mostly every Sunday and other days has reduced or completely stopped for about 5 weeks running now. Insecurity was rife. The dreaded unknown gunmen turned our dear State into a killing field. Life was Brutish and nasty. Men of means from the State who are resident in places like Abuja and Lagos started organizing traditional marriages in those locations. People avoided the State. Businesses bled. Those stories are beginning to change gradually as the combined team of security operatives are steadily riding the State of criminal elements and dismantling their operations. It is not yet Uhuru, but things are a lot better security wise. It is an evidence of a leader who understands the fundamental role security plays in development.

This is one of the greatest achievements recorded by this administration. Nothing beats a leader who has a mind of his own and is fully in control. Looking at Soludo, he exhudes a lot of confidence and does not appear like a leader under the influence of some unelected group of persons, or even the first lady. That is the beginning of success of any administration as we have seen how cabals or a powerful first lady can derail a government.

Inclusiveness is one major important ingredient in government that people overlook. Peter Obi did very well in his engagement with Anambra people and it worked because people felt they own the government. Soludo has equally toed that same part and has continued to carry ndi Anambra along in his programs,meeting stakeholders and even speaking to ndi Anambra through a lot of channels like town halls meetings, TV and radio phone in programs and personal engagement through online portals.

When you find yourself in a hole, the first action is to stop digging. Anambra is heavily in debt, and it is made worse by their grossly reduced FAAC allocations. Soludo understands the times and the imperative of prudent management of government resources. He has drastically reduced the cost of governance. He has succeeded in scrapping the office of the first lady, one of the conduit pipes the last administration used to milk the State dry. He has equally saved a lot of money by his patronage of purely made in Anambra and Nigeria products. The cost of road construction has equally reduced such that some funds was saved to the tune of 127, million in a recent road project. Cutting of cost in governance can equally be seen through the lean political appointments he has made unlike what we saw in the last administration where over 3000 unproductive SAs were being maintained from our bleeding collective till.

Education and healthcare are two critical sectors in development. It is sad that Anambra is one of the States hit by the dearth of personnel in these two sectors. With the employment of about 5000 teachers and 2000 health workers, Anambra is on the right trajectory in their bid to lead a revolution in education and healthcare. It is also amazing that these potential health workers and teachers were selected through stringent process that will throw up the best.

Digitising of processes.
Everywhere in the world, digitisation of government processes has reduced corruption. The digitisation of government processes, particularly revenue collection is one of the revolutions that has come to the State. This will save Anambra a lot of revenues that hitherto were finding their ways into private pockets, and like Soludo said, increase the State IGR to about 10 to 15billion naira monthly. The resultant effect is more money in the state treasury for more projects.

Soludo has continually promised to make Anambra livable and prosperous. But this is unthinkable with the decrepit state of the three major cities in the State. No serious investor will take any government serious with the way our cities are like madhouse. It’s unfortunate that as a result,our real estate has been worse hit because even as assets they are undervalued unlike what we have in some other States in the country. But with the governor’s initiative towards urban renewal, starting with a lot of attention and work at okpoko and the demolition of some illegal structures on flood channels,the Governor has sent a signal and it won’t be long before sanity returns to our cities and make it inviting for investors.

Donor agencies left the state after Peter Obi’s administration because of the loss of faith in Obiano’s administration. It is heart-warming to see these group of partners again in the state indicating interest in key areas of development. They are part of why Peter Obi succeeded and seeing them shows the faith they repose in this government and where Anambra is going.

As in Peter Obi’s administration, appointments no longer favour Governor’s kith and kin as we experienced in the last administration. The spread of the appointments to almost every local government is commendable. Nepotism is one of the reason why government derail . The appointment also saw increase in appointment of women as about 4 of them were included in key ministries-the attorney general and the commissioner of transport. It appears this is the first time a woman would head the transport ministry in the State

He has equally banned touts from collecting levies at the markets and from transporters. Even though pockets of activities of these urchins are still noticeable, they are gradually ebbing away.

A lot still needs to be done to make Anambra truly the light. However, these actions have shown some purpose. It is without doubt that if the present adminstration continues on this disciplined approach to governance, their objectives will be met. For the sake of our present and our future, may Anambra succeed.