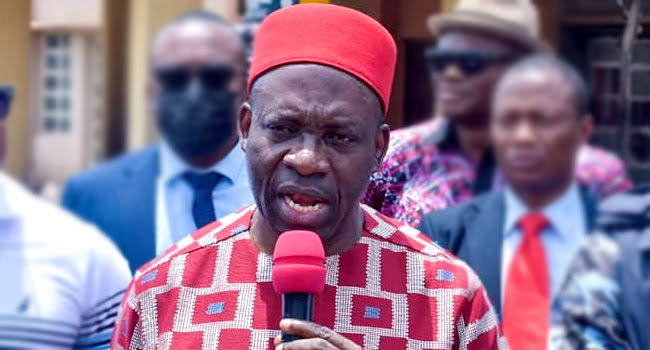 People of Okpuno, Isu, Awka and Nnewi in Awka South, Awka North and Nnewi North respectively are in for brighter economic prospects, following Governor Chukwuma Charles Soludo’s inspection of some roads which are in dilapidated condition.

Roads in the locations visited, are becoming a nightmarish experience to motorists and the citizens of these specific areas.

Speaking during the inspection with the people who came to welcome and cheer him, Governor Soludo promised to repair and build durable roads that will impact on the economic lives of the people of Anambra State.

The specific roads visited include the roads in Nodu-Okpuno in Awka South Council Area, Ifiteisu-Isuaniocha roads in Awka North as well as Otolo-Nnewi in Nnewi North Council Area.

Governor Soludo also explained that the visit is in keeping with his campaign promise to the people, as part of measures to improve the economic fortunes, alleviate the sufferings and make life more enjoyable for Ndi Anambra.

While stating that the visit will help him ascertain what can be done on those roads, he further explained that his administration is committed to its core mandate and manifesto, urging for support by the people.

It will be recalled that the present administration under Governor Soludo is focused on flagging off over 220 kilometer of roads before the end of the year. Currently, about 120 kilometers of roads have already been flagged off.