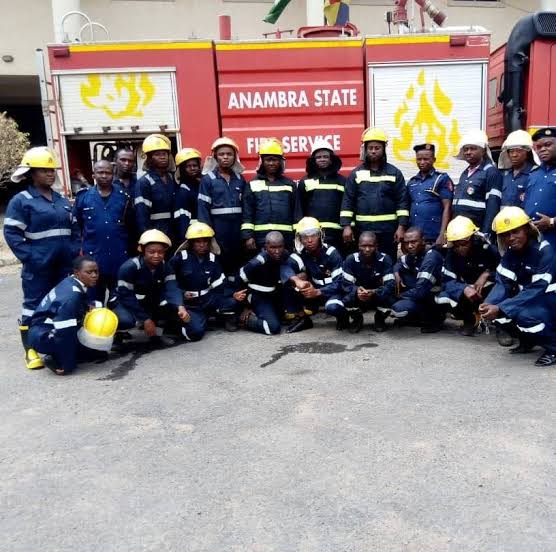 The fire incident of Wednesday 16th of October 2019 was a tragedy of enormous proportions. It was a sad day for the people of Anambra and a wakeup call for the government of Anambra State to give firefighting the attention it deserves through proper equipment and staffing of the Anambra Fire Service. A fuel tanker incident around MCC Onitsha spiraled into a fire disaster on the popular Ochanja market, razing down structures and goods worth hundreds of millions of Naira. There was a general outcry on the inefficiencies and deficiencies of the Anambra fire service prompting the then governor Dr Willie Obiano to order an investigation into the affairs of the State fire service with a view to ascertaining their capabilities and mobilization of the necessary interventions

The investigations revealed that firemen receive only ₦10 (Ten Naira) as their hazard allowances monthly, shockingly. The former Governor ordered immediate raise of the harzard funds to ₦20,000 a month. In addition to the monetary increment, he acquired two new Innoson fire trucks. Further investigations also put the total firemen in Anambra to 80, with about 25 nearing retirement. He therefore approved the recruitment of about 110 new firemen to boost and rejig the workforce.

Investigation by ANAMBRA PEOPLE revealed that between August 2021 to April 2022, Anambra state recorded more than 60 fire incidences and over 20 of those incidences did not record the presence of Anambra Fire Service. One begins to wonder why the firemen suddenly became unresponsive and less passionate towards their jobs.

Examples of the recent fire incidences are the Upper Iweka tanker fire incident in February, 2022. A fire truck appeared on the scene after an hour since the inferno started despite the closeness of fire stations (Okpoko, Ochanja, Main market). Usually, those stations either claim that they had no serviceable truck or available firemen on sight. Other notable incidents were the tanker fire incidents at Ihiala in September 2021 and April 2022 which razed down shops, buildings, businesses and residential structures worth billions of naira. The first Ihiala fire incident in September 2021 prompted ex-governor Willie Obiano to provide a serviceable truck to Ihiala fire station located at the local government head Quarters Ihiala with a road-show around town to create awareness. People were elated until the April 2022 incident which saw a fire truck arrive the scene after about 1hr 30mins of the raging inferno. It is important to note that the truck which eventually appeared on the scene came all the way from Awka. Needless to say that the fire had already wrecked great havoc on people’s properties. The lateness of the truck to the scene of the incident prompted angry fire victims to attack the fire truck.

These are aside fire incidences at Nnewi, Mobil filing station at Awka, the Agulu fire incident that occurred on the 26th December, 2021 which burnt over 12 persons beyond recognition, etc.

ANAMBRA PEOPLE began investigations to unravel the challenges facing Anambra Fire Service with a view to proffering the way forward in achieving the supposed aim of the fire service which is “saving lives and properties”.

Again, some of the firemen we interviewed in the course of our investigations on the condition of anonymity confirmed the poor state of the Anambra Fire Service.

Here are our findings under the following subheadings;

Anambra fire service is a department in the ministry of public utilities. To be employed under the Ministry of Public Utilities, you must either be an Engineer or a WAEC holder. To be posted to work in fire service, you must either have a degree or HND in Mechanical engineering, electrical engineering or civil engineering as a senior officer. If you don’t have the above qualifications, you will be admitted with only your O’ Level as a junior officer or a file as their term goes.

However during the recruitments approved by the then state governor Dr Willie Obiano in 2021, degree holders from other disciplines (apart from the three acceptable engineering courses earlier mentioned) were accepted by the civil service commission into the fire service fold, these make up to 38 of about 110 new recruits while over 40 others were just WAEC holders.

Unfortunately, these 38 men have not received a single hazard allowance from fire service since they started work in 2021. They were told that since they don’t belong to the ministry of utilities, they are not eligible to receive the hazard. This is regardless of the fact that they keep fighting fire and facing hazards. Their counterparts who were employed under the ministry of utilities receive their 20,000 naira monthly leaving these 38 heartbroken and without a desire or passion to carry out their responsibilities efficiently.

Several attempts to reach the fire chief Engr Agbili Martin proved futile. We however understand that these 38 men are spread across the 11 fire stations across the state and if they lose passion for the job, it will definitely affect the morale of their colleagues and dampen their passion for their risky job.

We are yet to receive any responses from the office of the head of service or the ministry of utilities but our investigators found out that these allowances meant for these 38 gentlemen might have been continuously diverted to personal pockets from August 2021 till date and it amounts to ₦8,360,000. The only excuse is that they don’t belong to the ministry of utilities. It is a lame excuse, obviously.

The primary aim of every government is protection of lives and property. Security isn’t just making sure that the State is rid of criminal elements. It is also about ensuring that possible hazards like fire are prevented and/or prepared for. This means that having a robust firefighting service is indispensable for every responsive government. It is a proactive measure. The robustness of the fire service isn’t just about provision of sufficient firefighting equipment. It is also about ensuring that those who risk their lives and limbs as fire fighters are well remunerated and motivated. These remunerations should include health insurance and life insurance packages. It is the least any serious government can do to attract FDI. The New York City Fire Department has over ten thousand uniformed firefighting employees. The government should do well to rejig the firefighting service of Anambra State, looking into issues of remuneration and other incentives for optimal performance. Please keep a date with us next week as we discuss other areas that enable the poor performance and the inefficiencies of the Anambra Fire Service.